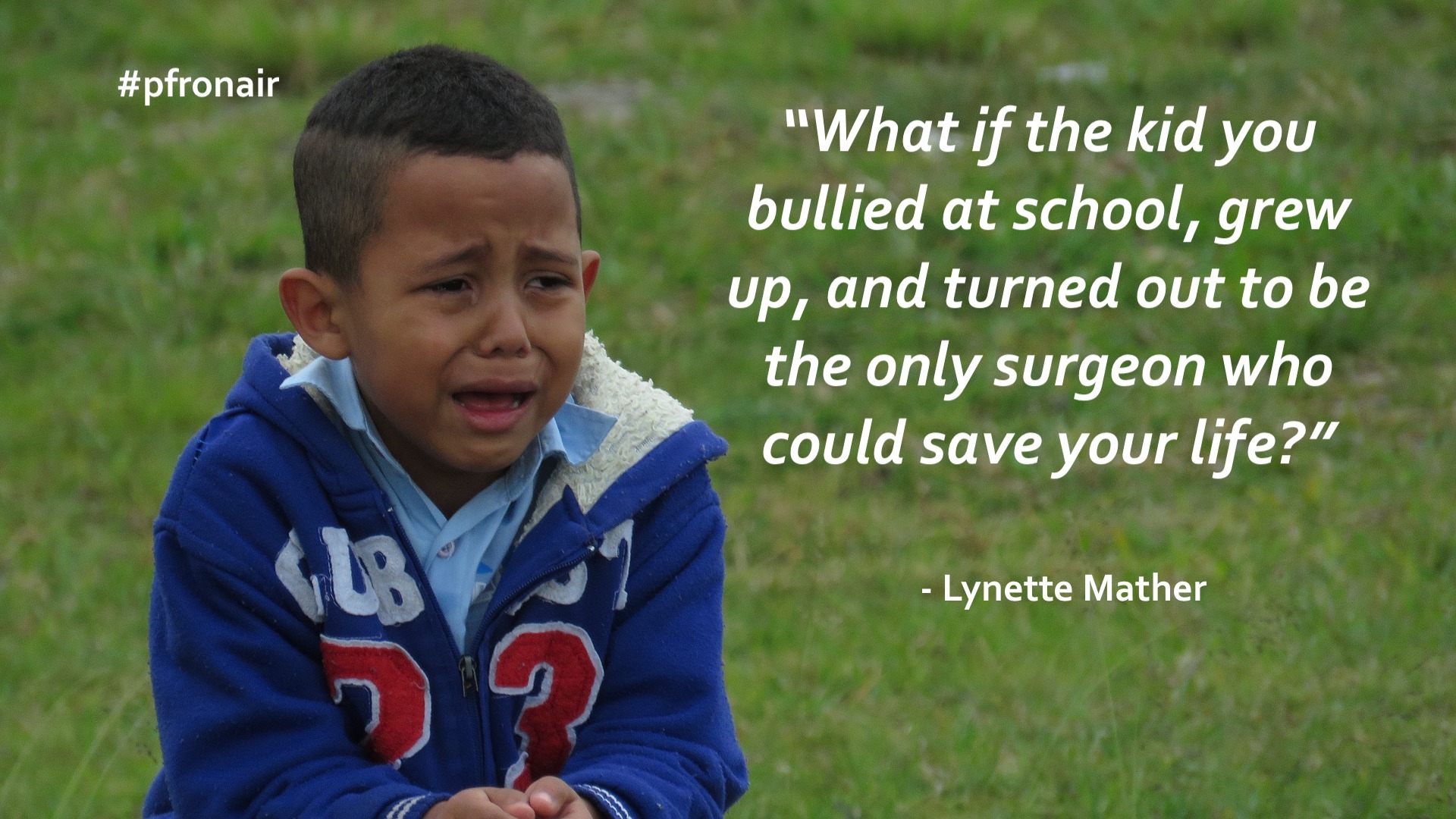 Today, we look back at an earlier show that talks about the issue of bullying that affects so many children today.  We visit the Don't Be a Bully Foundation in Atlanta and talk with the Founder and CEO, Kim Davis.  Later in the episode, Bruce Gale brings us an interview with our Kid Hero, Justin Sather.

“I want someone to look at me and say “Because of you I didn’t give up”. – Mahatma Gandhi

Bullying affects everyone involved…the victim, the bully and those who witness it.  Not only are there the immediate effects but the serious and long-term consequences that impact their mental health, drive them to substance abuse and elevate the risk of suicide.  Bullying is not a “rite of passage” but a serious threat to student safety and well-being.

Just consider some of the statistics:

• Over 3.2 million students are victims of bullying each year.

• 30% of young people admit to bullying others

• 70.6% of young people say they have seen bullying in their schools

• Approximately 160,000 teens skip school every day because of bullying

When students and school staff ignore bullying behaviors, they are sending a message that bullying is acceptable or something that can’t be stopped.

This brings us to today's highlighted charity, Don't Be a Bully Foundation...

They work to educate and motivate the community through their stage production Speak Up! Speak Out!, youth workshops, seminars and dialogue discussions. The organization consists of volunteers that are educators, teachers, therapists, performing arts teachers and artists, as well as parents who conducts our DBAB workshops, seminars and stage plays.  @dontbeabullyfoundation

8-year old Justin Slather loves frogs, which might seem just like another ordinary thing- except he’s taken that love to another level.  It all started in kindergarten, when Justin learned almost one-third of frog species are on the verge of extinction. He learned pollution, pesticides, and habitat destruction are the main causes for their decline. Justin’s mom saw his passion to create change, so they set out on a quest to tell the world and launched For the Love of Frogs.

Justin didn’t realize his love for frogs would turn into a passion for taking care of the planet. He became interested in recycling.  Justin wants people to know that it only takes one small change in their life, something as simple as the type of toothbrush they use, to make a positive impact on the planet.  He taught his classmates about the impact plastic toothbrushes can have on pollution, and then encouraged students to recycle their own toothbrushes by turning them into works of art.  @justinsfrogproject

Bruce Gale had the opportunity to talk with our Kid Hero, Justin.