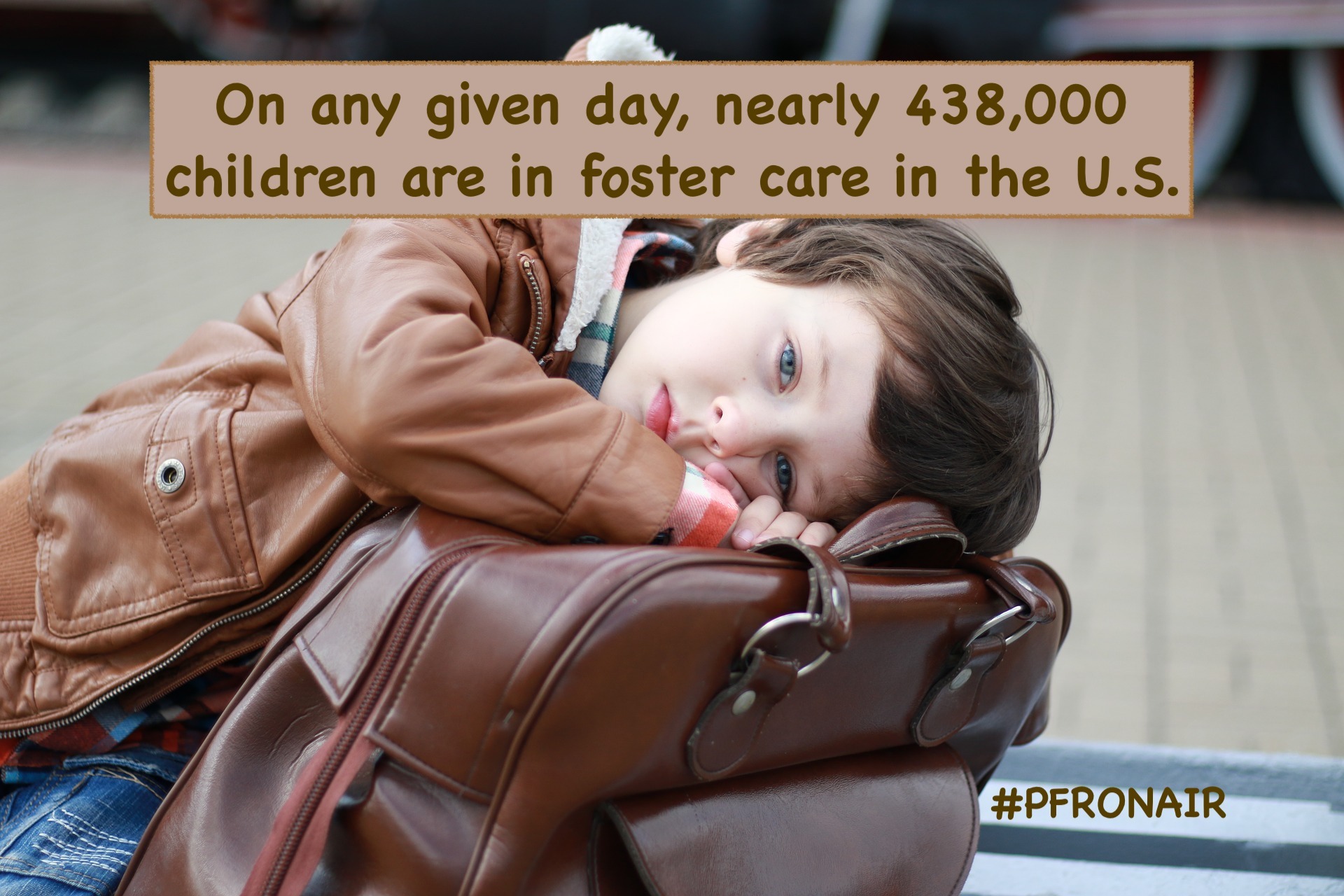 On today's show, Adrian visits Hope in a Suitcase, a nonprofit in Los Angeles providing tangible hope to foster children.  Later in the show, Bruce Gale brings us an interview with this week's Kid Hero, Robby Eimers.

According to a 2017 U.S. Department of Health and Human Services (HHS) report, the number of children in the foster care system nationally has increased for the fourth year in a row.  Why the increase?  Many agencies attribute the rise, in part, to increased parental substance abuse.

The increase in the number of children requiring foster care services is putting a significant strain on child services staffing and other resources, especially in states hardest hit by the opioid epidemic.

• More than 56,000 children in child welfare systems are living in group homes or institution placement.  Advocates agree that children have more success when placed in family settings from the start.

• More than 30% of homeless people in the U.S. were previously in foster care.

More than one third of children who remain in foster care for one to two years, are bounced from one placement to another three times or more. These children never know when their lives will be uprooted next.

Being bounced around leads to long-term behavior and emotional problems for these children. This instability increases the likelihood of mental health problems and poor educational achievement, as children are shuttled from school to school.  And sadly, each change in foster placement decreases the likelihood that a child will return home or be adopted.

One nonprofit working to remind these foster kids that someone cares is Hope in a Suitcase, our highlighted charity this week…

Hope in a Suitcase, located in Los Angeles, is a volunteer-driven, nonprofit group benefiting foster children.  Their mission is simple.  They provide children and teens in foster care with a suitcase, along with basic essentials and comfort items, to make their transition into the foster care system and their circumstances just a little bit easier and more dignified. @hopeinasuitcase

There are approximately 35,000 youths in foster care in Los Angeles County alone.  Many children do not have a suitcase or a duffel bag when they enter foster care, especially in emergency situations.  They often have to bring whatever belongings they can fit into a plastic trash bag.

Hope in a Suitcase is part of “The Emporium” a mid-city collaborative effort between Hope in a Suitcase, The Book Foundation and Foster Care Counts.  Their coordinated effort at The Emporium is envisioned to provide seamless support as youth mature, to help insure that no youths “fall through the cracks” as they transition from young teens to young adults.

Adrian had the opportunity to sit down with Marsha Austen, Co-Founder & Director and Eufe de la Torre, a Co-Founder with 20+ years as a social worker.

Robbie’s efforts to serve the needy began when he was 8 years old and his grandmother, Cindy Kostukoff, took him to a homeless warming center in downtown Detroit. There, they passed out coats and blankets — which Robby bought with his own allowance and birthday money — to the people looking to escape the winter cold. @theeimersfoundation

What his grandmother initially thought would be a one-time act of kindness lit a fire in Robby.  The two started to go more regularly – first once every other month and then once month until eventually visiting the homeless every Saturday.  Robby still purchases many of the items himself, and for the people he helps, the supplies can make a world of difference.

Robby was joined by his sister, Emma, and in May of 215 they launched their own nonprofit, The Eimers Foundation.  We’ll hear from Emma next week.

Bruce Gale brings us this week’s interview with our Kid Hero, Robby Eimer.