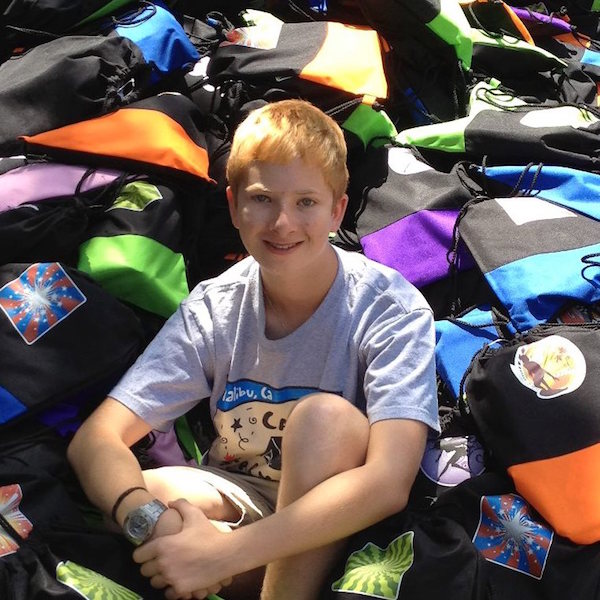 This week's Hero of the Week is 16-year-old Zach Bonner, who was born in Searcy, Arkansas, and now hangs his hat in Tampa, Florida. When Zach was just 6 years old, he witnessed the devastation of Hurricane Charley firsthand. But rather than being overwhelmed by the numbers of people he saw displaced by the hurricane, he chose that moment to leap into action. Zach grabbed his little red wagon and delivered 27 pickup trucks full of water, one wagon load at a time, to families who'd lost their homes to the hurricane. When he was 7, he officially founded the Little Red Wagon Foundation.

From the beginning, Zach focused on helping homeless children. "These kids don’t have a home, they don’t have a safe place to sleep at night. They’re out on the streets not because they want to be, but because it’s out of their control.”

In 2007, at age 9, he did a fundraiser called My House to the White House in which he walked 1,225 miles from Tampa to Capitol Hill in Washington, D.C., raising over $25,000 for homeless children and sleeping among them in shelters in D.C. to get to know them and learn more about their struggles.

In 2010, when Zach was only 12, he started walking again one day in Tampa and ended up in Los Angeles, 178 days and 2,478 miles later, raising funds and awareness and meeting with and inspiring homeless children and handing out gift cards all along the way. He averaged nearly 20 miles a day, no matter how hot or cold or rainy it was. When he finally stepped onto Santa Monica pier to the cheers of hundreds of performers, Sir Elton John was waiting for him with a $50,000 check.

Zach greeted his supporters with the following speech: “There’s an ancient Chinese proverb: ‘A journey of a thousand miles begins with a single step.’ Most people don’t walk a thousand miles, or 2,500, but what it really means is that we all need to take that first step to get something big done.  If I’ve helped even one homeless child, I hope I’ve accomplished that.”

The 16-year-old - who founded Little Red Wagon foundation after Hurricane Charlie - met and exceeded his goal to collect the most food in 24 hours with 566,600 pounds of food. The old record of 559,885 pounds was held by a school in North Carolina.  Food that was collected during the two-day drive will be distributed throughout a 10-county area that includes Hillsborough, Pinellas, Pasco, Polk, Hernando, Citrus, Sumter, Highlands, Hardee and Manatee.