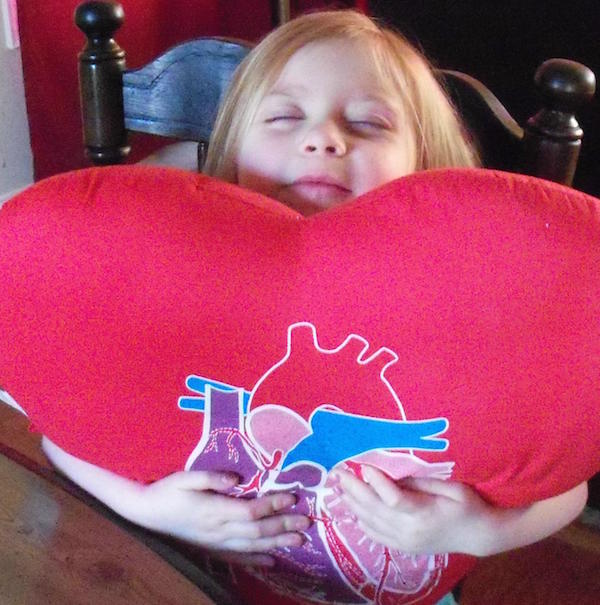 Lorelei was born in 2005 with only half a heart. She had her first open heart surgery immediately upon being born and has endured 16 major medical procedures since then, including three more open heart surgeries from the age of three months onward.

When Lorelei had another of her major heart surgeries at age 3, she was given a compression pillow that her great grandfather used to help himself recover from a quadruple bypass surgery. These compression pillows are clutched tightly to the chest and bring relief from the discomfort and pain, because the action of holding the pillow helps diminish fluid buildup in the heart and lungs. Lorelei was really struggling, and the pillow helped her recover, even though the adult pillow was way too big for her tiny body.

By the time Lorelei was five, she had become a sewing wiz. And she had an idea. If these compression pillows worked so well for adults, why hadn't anyone thought to make them for small children? So Lorelei started making little compression pillows to give to other small children like herself who must endure frequent heart surgeries and procedures. She got such a huge response that she created her own organization, called Heart Hugs.

In the early days, Lorelei was making and delivering a pillow a week, all by herself. Now she has a team of volunteers who have helped her make 1,600 Heart Hugs Compression Pillows for young children in 13 countries who need help recovering from heart and lung surgeries and procedures.