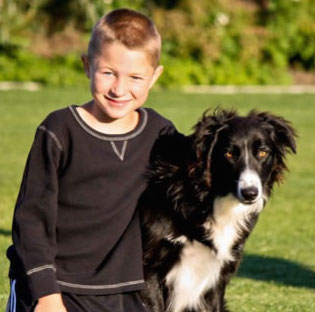 Homemade necklaces inspired by a Treasure Valley boy are making quite a splash in the autism community and beyond. It all started when 8-year-old Drew Elliott, who has autism, told his mom he wanted a best friend.

"He and I were at a restaurant one day and he was feeling sad and there were about 13 construction workers, greasy hands and hard hats on, and he said 'I want someone to wear the other half of my BFF necklace and I asked a whole bunch of kids and no one would wear it,'" said Drew's mom, Natalie. Those 13 construction workers heard what happened, and they all wanted to wear one, but only if Drew made the necklaces himself. So he did.

"It started out with 13, and then it got bigger than we were," said Natalie.  Much bigger. The word spread on Facebook, and a little boy who just wanted a friend became an instant star.

It became a little Facebook page called Drew Elliott and Friends. Hundreds of people have liked the page and requested the necklaces. Once they get them, they post pictures.  This has become a page full of friendship and support for all, reaching out specifically to those with autism. When Drew was nominated as an Everyday Hero, his Facebook page had around 600 likes. Just three months later, his page is currently liked over 4,000 times with hundreds of friends from around the world posting photos of their friendship necklaces.

Drew's necklaces are now being worn around the country, and the world.