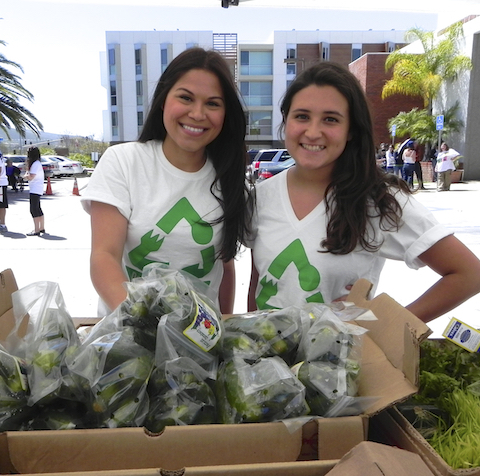 Four years ago, while honor student and national dance champion Camille Posard was producing a story for her broadcast journalism class, she learned that many seniors suffer from malnutrition and hunger because they have to choose between utilities, medications, and food due to their fixed incomes. She learned that 150,000 children in San Diego go to bed hungry every night and that 17 million children don't have enough to eat nationwide. She also learned that many of our military veterans go hungry, and that many active duty military families struggled to feed their children due to the financial strains of multiple deployments and frequent relocating. So Camille wrote and produced a documentary film called "One in Seven: The New Face of Hunger" to bring attention to these issues.

And just as Camille was devastated by the statistics that inspired her to make her documentary, her little sister, Gabrielle, was devastated by her sister's film. Just as Camille had done, Gabrielle sprang into action upon learning that 40% of all food produced in the United States is WASTED. That's $31 million and 96 billion pounds worth of good food that gets thrown away every year, which is enough food to fill 91 Empire State Buildings. Wasted food accounts for 25% of our precious fresh water every year. It takes 300 million barrels of oil to transport it to landfills. Food is the largest source of landfill waste by weight, and rotting food releases methane gases into the atmosphere that are 25 times more potent than Carbon Dioxide.

So Gabrielle formulated a plan. At age 12, she founded Donate Don't Dump.  She made her big sister her Vice President and recruited other teens to help them achieve their goals. So far, Donate Don't Dump has rescued over 900,000 pounds of food from landfills. Each month, Gabrielle's team rescues and distributes 20,000 pounds of surplus and short-dated food donated by grocery stores, growers, and food companies so that it ends up on the tables of hungry families instead of the landfill.