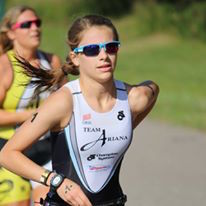 When our past Hero of the Week, 14-year-old Ariana Luterman, began being bombarded by sponsorship offers after placing in and even winning adult triathlons before she was even a teenager, she closed her eyes and saw dollar signs… but not for herself.

When she was a small child, she would call the Vogel Alcove, ask what the children there needed, ask her parents for those items instead of birthday and Christmas gifts, and donate them to the kids.

Today, this outstanding young woman has used her athleticism and business savvy to donate more than $55,000 to Vogel Alcove and, like many of our Heroes of the Week, is a recipient of the Gloria Barron Prize for Young Heroes. “The future of our country is riding on this next generation, and we have the power to help,” Ariana says. “It’s our duty. It’s our obligation.” We couldn’t agree more, Ariana, and we’re proud of you for saying so. She joins us today on our show.