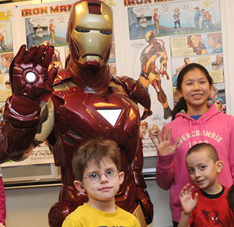 Anthony Smith is a child born with a genetic chromosome abnormality that has affected not only his ear development and hearing, but also his heart and speech. Last year, he refused to put on his hearing aid, which he calls “Blue Ear,” because he thought that super heroes didn’t wear them. In an effort to make amends, his mother Christina D’Allesandro contacted Marvel and asked if there were any hearing-impaired heroes in the Marvel Universe.

And thus began Anthony’s story and Marvel’s contribution that has not only generated massive media coverage, but also reached families around the world facing similar challenges.  Phonak (maker of hearing aids) and Marvel Comics partnered up for a great cause to reduce the stigma of hearing aids in kids by producing an educational poster geared towards the positive benefits of hearing aid technology. The poster features the very popular super hero Iron Man and is currently being distributed to pediatric hearing practices throughout the country.