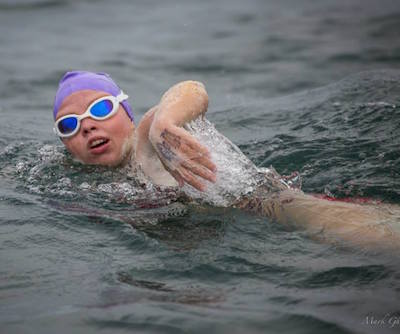 She visited Camp Trillium and was so moved that she asked to volunteer – but at 13 she was too young to help.  Instead, the toothy, diminutive girl from Norfolk County decided to raise money for the camp by becoming the youngest person to swim across Lake Ontario.

Over eight months worth of planning, hundreds of hours of hard physical training, amassing a team of dedicated crewmates, approaching sponsors and collecting donations -- and finally, swimming for twenty-seven hours across the cold, rough waters of Lake Ontario.

Why would a fourteen-year-old girl take on such a challenge?

For Annaleise Carr, the motivation came not from a desire for glory. Her ultimate quest was to raise money for her new friends at Camp Trillium, a charity that provides a camping experience for kids with cancer. What kept her going through the cold water, the exhaustion, and the terrifying night swim was the thought of those kids and their families that she was helping. In August of 2012, she became the youngest person to cross Lake Ontario, breaking the record set more than fifty years earlier by Marilyn Bell.