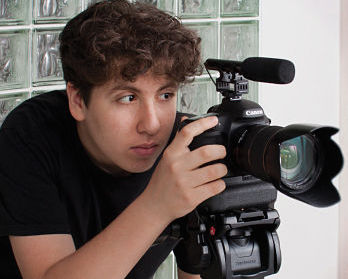 Back in 2009, Alec Urbach from Roslyn, New York, founded a 501(c)3 organization called Giving From the Ground Up, or GFGU. Through its subsidiary, Alec's Animated Schoolhouse, Alec animates and edits his own educational films that act as lessons in math, science, and hygiene, along with cartoon workbooks for elementary students that have been distributed around the world. Alec says, "Film presents a narrative, unfolds a story that can inspire and teach, and we are all hardwired to love a good story."

In addition to the animated films and cartoon workbooks he creates for Alec's Animated Schoolhouse, he has also written a series of socially conscious comic books called Worldwise Comics. These books teach ethics and lessons about important issues that face all children, including bullying, the importance of clean water, never bowing to negative peer pressure, and respecting animals and the environment. I spoke to Alec yesterday, and he tells me that the comics are currently being translated into Spanish, French, and Arabic, with Russian translations on the horizon.

So what's the impact? To date, Alec's cartoons and comics have reached 250,000 children in Africa and South America, and he's working on bringing the comics to classrooms in the U.S., as well. GFGU funded the first Science Elementary Schools in two African villages and also funded an additional $20,000 worth of clean water wells so the students could have access to fresh water for the first time in their lives.They also delivered more than 240,000 medical, hygiene, and school supplies to children in Ghana and their families.

Alec attended the 2012 Three Dot Dash Summit in New York as a Global Teen Leader. He's received the Presidential Service Award, the National AXA Academic Scholarship, the Prudential Spirit of Community Award, and recently made the list for the 25 Most Powerful and Influential People in the World by Youth Service America.