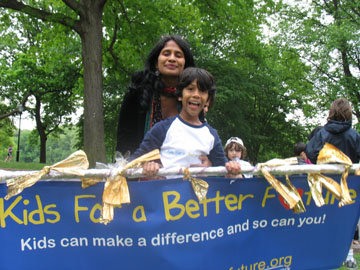 In 2006, when New York City native Akash Mehta was only 8 years old, he founded Kids For A Better Future.

KBF is a non-profit organization that's run FOR children, BY children. Each year, Akash chooses a different cause and raises money, awareness, and advocacy through various fundraisers, events, and even protests. He's 16 now, which means he's been fighting for children's causes around the world for literally half his life.

With the $50,000 Kids For A Better Future has raised, they've helped build a school for girls in Afghanistan. They sheltered and rehabilitated former child soldiers in the Congo. They provided free health care and clinics to children of victims of the 1984 Bhopal industrial disaster who still suffer from crippling illnesses and devastating birth defects. They've helped homeless children in New York City and provided aid to other young peacekeepers in conflict areas around the world. And, just this month, Akash organized a walk-a-thon to provide education and safety for children in some of the poorest favellas in Brazil who have been traumatized by intense violence and sickened by poor public health conditions.

Each year, they choose a different organization to support that does crucial work for the kids they want to help. They raise money for them through a variety of events – everything from birthday appeals to walkathons to lemonade stands – as well as advocating for them in whatever way possible.

And, like many of our other Heroes of the Week, Akash recently attended the Three Dot Dash Summit for Global Teen Leaders in New York City.