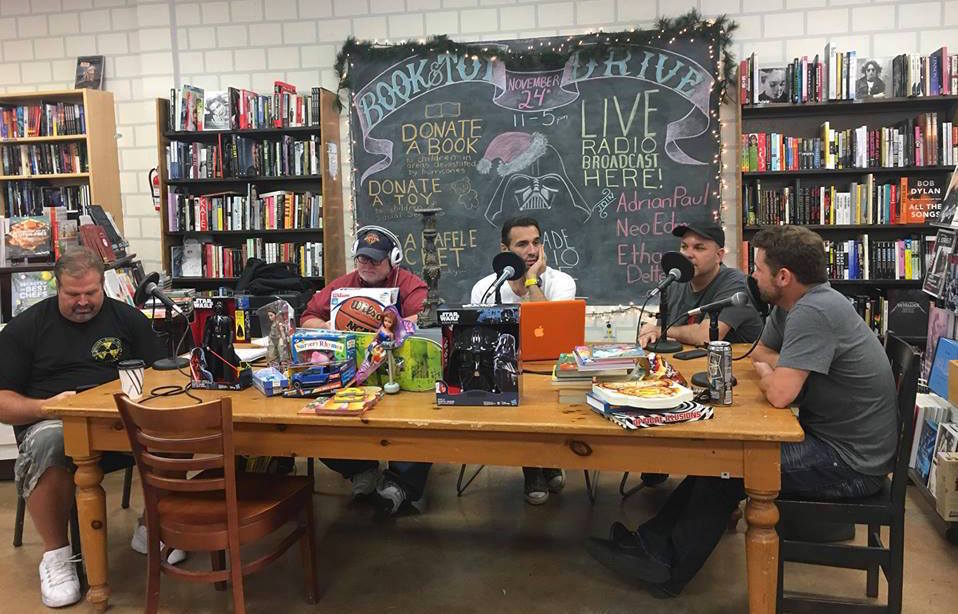 Adrian takes us to Young Storytellers in Los Angeles where he talked with them earlier in the month.  Kimberly and Chad wrap up the show with a couple inspiring stories of kids doing amazing things.

Humans live in stories every day and dream in stories all night long. We are all storytellers and story listeners. Storytelling allows us to understand and connect with the world around us and helps us feel like we are a part of something. It is an important, memorable and valuable social tool.

Some stories have lasted hundreds and even thousands of years and are still being told.

Stories give children heroes in which they can aspire, having adventurous journeys in distant lands. Children need these heroes, for heroes are a positive influence on their lives. A template from which they can learn to grow and develop. Stories also teach them to use their imaginations.

Children may lose thinking capacities and analyzing powers if they are exposed to television, several hours a day.

Earlier this month, Adrian visited the Los Angeles nonprofit Young Storytellersand talked with Program Manager Curtis Baxter.  Young Storytellers engages creativity through the art of storytelling. Using the timeless techniques of mentoring, collaboration, and performance, we provide public school students with an opportunity to write stories and see them brought to life on stage and film. Their mission is to inspire young people to discover the power of their own voice.

In 1997, a group of young film students learned that Los Angeles public schools were cutting creative arts programs from their budgets. Knowing the value that arts education held in their own lives, they created a volunteer-based creative arts program they could take directly into public schools at no cost to the school. Today, Young Storytellers offers a variety of programs designed to engage the creativity of students at several points in their education experience.  @youngstorytellers

Kimberly brings us the story of a 7 year old boy - Cody Struble - who is determined to make the holidays special for the children in the pediatric unit of the Children’s Hospital of Wisconsin. It’s his mission to provide a gift for all the children that are unable to go home for the Christmas holiday.

Once a patient at CHOP himself, he can empathize with the current patients. Cory had a condition where his skull bone closed prematurely and he had experienced 3 major surgeries by the time her was 5 years old.
This is the 2nd annual Holiday Toy Drive for the pediatric patients.

In 2016, Cory collected 518 Christmas gifts for the children in the Children’s Hospital of Wisconsin. This year, his 2017 goal is 800 gifts.

Chad brings us our next amazing story.  When Katie Stagliano a 9 year-old from Summerville, South Carolina was in third grade, her teacher enrolled her class in a program that distributes cabbage seedlings for students to grow. Katie picked out her seedling and took it home. She cared for the cabbage and after some time, it grew to a whopping 40lbs!

Katie wondered what she could do with a 40 pound cabbage. She thought to herself, “maybe it could help feed a couple of people. So she donated the cabbage to a local soup kitchen and to her surprise, the cabbage fed a 275 people.  She was thrilled to be able to see her cabbage do so much good.

So began Katie’s Krops. Katie began partnering with her school to set up a community gardens to grow produce to donate to local soup kitchens. According to Katie, she gathered all her friends up and told them that they were going to create fresh and healthy meals for people in need. Even the school chef offered to cook all the meals with the produce that the student harvested. Katie and her friends began to organize “Katie’s Crops Dinners”. These monthly dinners would be hosted at the local soup kitchen and staffed with student volunteers to cook and serve the crops that came from the student’s garden.

The amazing success of Katie’s Crops spread to youth across the country and inspired them to join Katie in her mission to end hunger. Katie, through donations to her nonprofit, offers grants and education to students across the country to start their own community gardens to feed the hungry in their neighborhoods. To date there are over 100 youth-run gardens in more than 27 states! But she isn’t stopping there. Katie’s goal is to have 500 gardens in 50 states.

We will be working to get Katie to join us on PEACE Fund Radio in the coming weeks, so stay tuned to learn more about Katie and the amazing work she has done and inspired.  @KatiesKrops