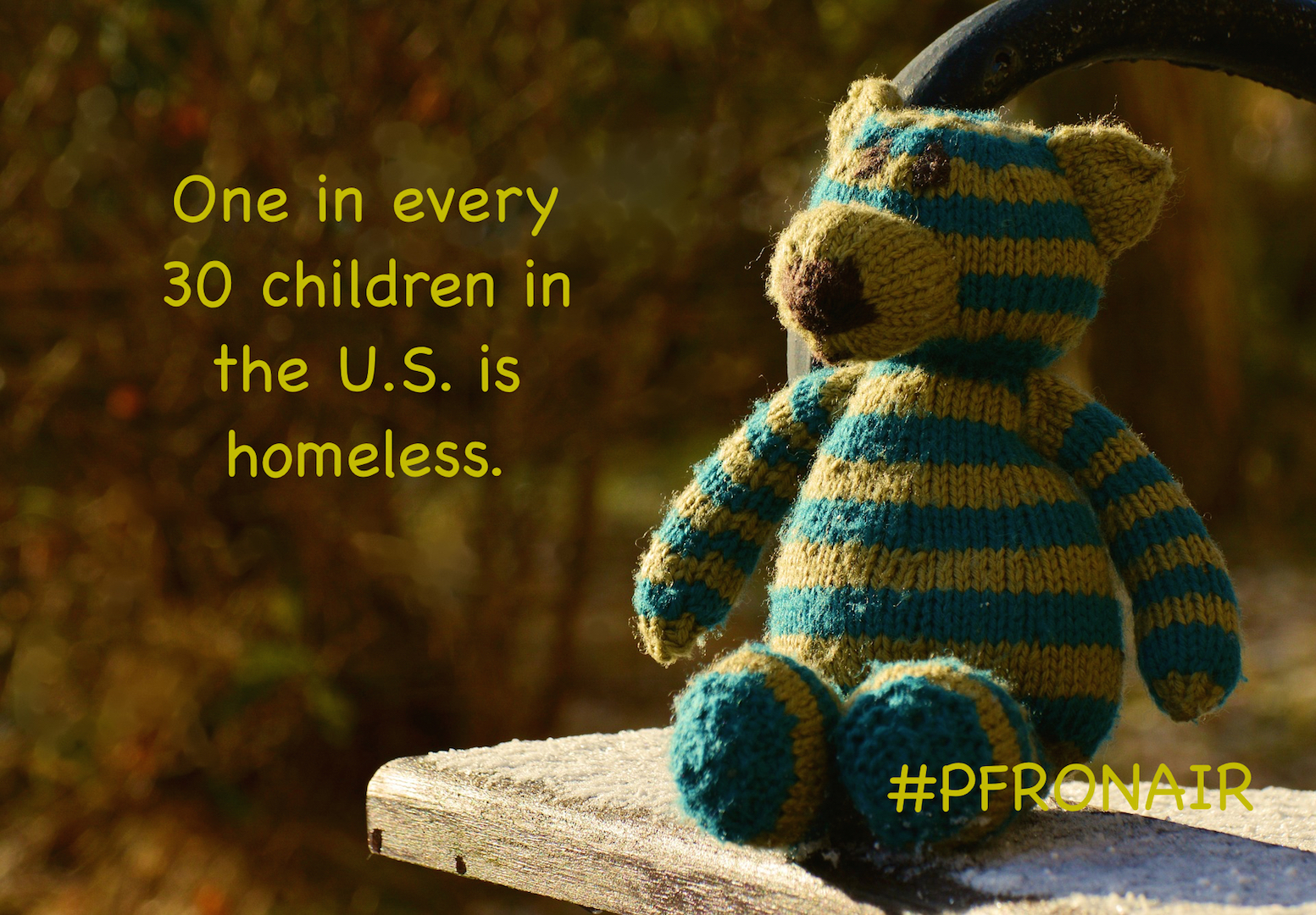 This week we take a look at the issue of homelessness and visit Mike and Jessica Kovac at Blessings Under the Bridge.  Later in the show, Adrian talks with Erica Gimpel.

According to the National Alliance to End Homelessness states that there are 564,708 people experiencing homelessness on any given night in the US.

Sadly, twenty-three percent of the homeless population in the US is under the age of 18. Homeless youth are especially vulnerable to drug use; one study found that 55 percent of street youth and 34 percent of shelter youth have used illicit drugs since leaving home, compared to 13 percent of youth who’ve never been homeless.

According to the National Coalition for the Homeless, two trends are largely responsible for the rise in homelessness in America over the past 20-25 years: a growing shortage of affordable rental housing and a simultaneous increase in poverty. Persons living in poverty are most at risk of becoming homeless. In the United States, homelessness is an undeniable reality that impacts people of all ages, ethnicities, and life circumstances.

The homeless are people who live in extended stay hotels, the backseats of their cars and bounce from couch to couch with their friends. They sleep in their distant relatives’ garages and their significant others’ basements. More often than not, they are hard-working, honest people who just don’t have the social supports to steady themselves.  These people are without the financial resources to afford market-rate housing. Report after report says this is the number one reason why people are homeless in the United States today.

Yes, many people in the U.S. are persistently homeless. Yes, many of them have significant mental health and substance use issues. But the statistics tell us that isn’t the case for a majority of the nation’s homeless – indeed, they are “normal” people, who are just going through momentary displacement periods, thanks to a lack of both financial resources and social support systems.

Government benefits might play a significant role, but those alone are not enough to ensure a poor person stays off the streets or in shelters. The biggest difference – perhaps even the key variable – is social support. Does a poor person have someone who will take them in and shelter them and feed them and keep them safe until they can get back on their feet again – a relative, a close friend, a significant other? Well, if that’s the case, that person most likely will not end up homeless, or at least not homeless for an extended period of time.

While filming the series Live Life Forward in Spokane, Washington, Adrian spent time with Mike and Jessica Kovac, the Founders of Blessings Under the Bridge.

From the beginning, Blessings Under the Bridge has offered unconditional love to the homeless by restoring hope, purpose and dignity to the hearts and lives of those lost on the streets.  An upscale server for the homeless, founder Jessica Kovac and her husband Mike, have served over 100,000 meals under an I-90 overpass in Spokane since 2007.

Blessings Under the Bridge provides a weekly event under the I-90 overpass in downtown Spokane also known as the bridge. They serve over 350 men, women and children offering more than a meal. With over 70 volunteers each week they serve from several different stations. These include, a 7-course meal, groceries, cold and hot beverages, treats, pet food, shoes, clothing, hygiene products, music and more.

With the support of local businesses, nonprofits, and other programs they offer a wide variety of services. Blessings is supported by sponsors, donors and the great people in their city. They also hold two major specialty annual summer and winter events serving over 1,000 people per event.

While filming recently, Adrian had the opportunity to talk with Erica Gimpel.  An Actress/Singer/Songwriter/Dancer, Erica was surrounded by the sounds of music very early in life. Her mother, concert singer Phyllis Bash, was 8 months pregnant with Erica while performing in the opera Porgy and Bess. Erica grew up in Manhattan and began to study piano at age 5. She was accepted into the prestigious High School for Performing Arts and during her junior year landed the role of “Coco” in FAME, the groundbreaking TV series that would go on to become an international hit and encourage millions of young people around the world to “follow their dreams.”

Erica relocated to Los Angeles, became an international star with platinum soundtracks, and was performing in sold out stadiums around the world.  Since that time she has gone on to star in dozens of TV shows and movies including Freaky Friday, Profiler, Criminal Minds, True Blood, Grey’s Anatomy, Babylon 5 and many others.

Erica talks about cultural unity and her passion for the work being done by the nonprofits One World and Downtown Women's Center in Los Angeles.

Michael Ioffe, a high school senior in Portland, Oregon, is interested in finance and architecture, and hopes to work in affordable housing someday. But on the way to fulfilling those dreams, Michael ran into an early snag...business camp that he couldn’t afford.

Though he ultimately earned a scholarship to attend the camp, his eyes were opened to the difficulty many have in accessing quality educational resources, particularly for young people pursuing business. So he came up with a solution, at least in Portland: a speaker series in which he invited local business leaders and entrepreneurs to give talks.

One year later and he’s now the founder and executive director of Talks on Innovation, Leadership, and Entrepreneurship (TILE), a nonprofit speaker series with 57 chapters in 12 countries — operating on a budget of just $500 a year.

He hoped a volunteer-based speaker series could circumvent those barriers, and allow more students to receive potentially life-changing advice, insights, and inspiration at an early age.  The Portland events was called the Stumptown Speaker Series.  Stumptown Speaker Series is a non-profit that aims to provide easily accessible insights into business, leadership and entrepreneurship for students of all backgrounds. Through the series, students from fifteen Portland-area high schools and one Portland-area university can meet and learn from leaders in Portland's business and non-profit community, completely for free.