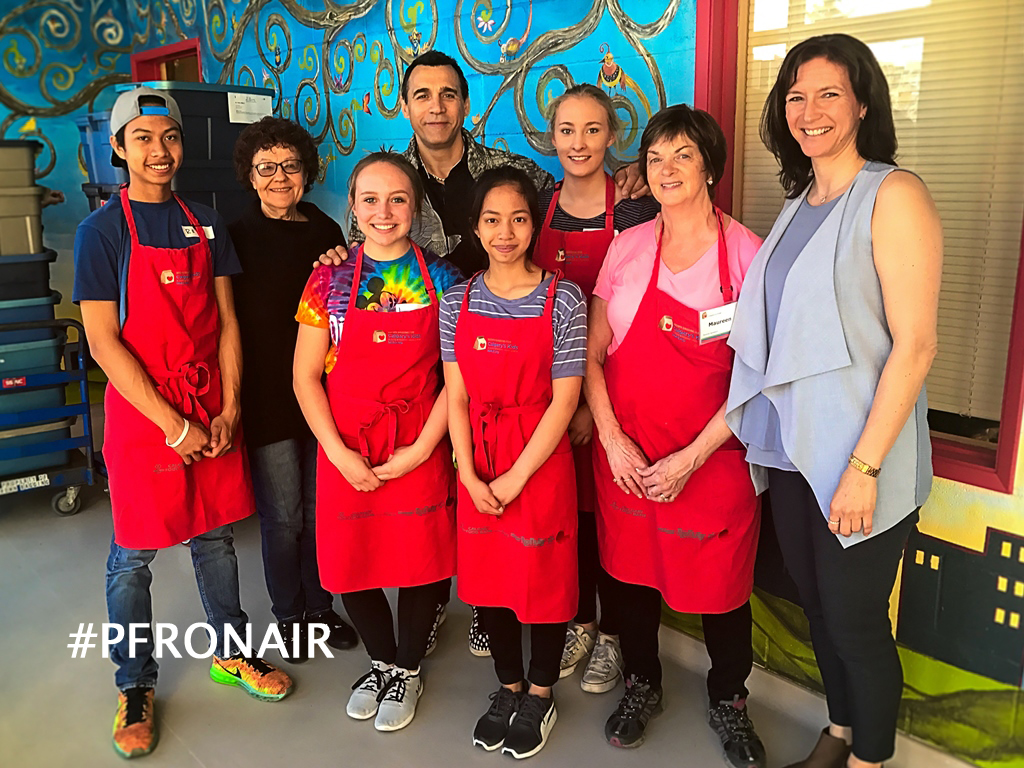 Today we talk about child hunger and visit with Tanya Koshowski, Executive Director of Brown Bagging for Calgary’s Kids.

“As families struggle amid the continued economic downturn, a growing number of students are arriving to school hungry — with no breakfast, packed snacks or lunches — depending more than ever on social agencies for food donations.

Up to one-third of Calgary schools now receive “single-meal” supports from the Calgary Food Bank and other local agencies, getting either breakfast or lunches delivered to students whose parents can’t provide those meals at home.

Food insecurity is also spilling over into the weekend, when kids who are hungry at school are scavenging for food Saturday and Sunday because parents are either at work or there isn’t enough at home.” (An excerpt from an article in the Calgary Herald, December 2016)

The Calgary Food Bank continues to expand its Food Link program, which provides food to organizations such as Brown Bagging for Calgary's Kidsand 22 schools that get food to help build “emergency pantries”.  This helps teachers who would otherwise purchase food for children out of their own pockets. Teachers across the province are dealing with the difficult reality of hungry students in classrooms every day.  They are pulling food out of their own lunches, or making purchases with their own money, because they know there are children in their classes that don’t have enough food for the day.

For many parents, economic hardship has become the new reality. The downturn in Alberta’s energy sector has led to thousands of job losses, and the subsequent ripple effect has traumatized the financial stability of hard-working Calgarians.   Many who once had a secure financial foundation are now struggling to put food on the table.  Working poor families and single-parent families are at particular risk of food insecurity.  Many families have at least one parent who is working, sometimes multiple minimum wage jobs in a desperate attempt to meet basic needs.

One organization that is making a difference is Brown Bagging for Calgary's Kids.

Brown Bagging for Calgary’s Kids (BB4CK) has one goal: no hungry kids in Calgary. They strive toward this goal each day by providing 3,200 healthy lunches directly to kids, and by empowering communities to create lasting social change. There are hungry kids in their city and there is a caring community of Calgarians who are working together to help feed them.

BB4CK exists because they believe that everyone has the power and the responsibility to take meaningful action that improves their community. This action could be large or small – holding a door open, cooking food for a neighboring family, making a large donation or time commitment, and so many others. Any of these are opportunities to make an impact and build a stronger community. Every meaningful action makes a difference.

Brown Bagging for Calgary’s Kids is able to do what they do by empowering volunteers, community groups and supporters who are passionate about the problem of childhood hunger to take action.  Building a sense of community among individuals who are working together to solve problems, often leads them to solve other problems in their community.

Empowerment is key here.  They believe that a small, simple action using your head, your heart and your hands can make a difference.  It’s Calgarians coming together to build capacity and community and values into the kids in their city in need of a healthy lunch.

$1 to feed a child - Each lunch costs only about $1 to make, thanks to the help of their in-kind partners. These partners include the Calgary Italian Bakery, Chongos Produce Market, Wholesale Club, Calgary Food Bank and Mountain Meadows Food Processing.

While in Calgary earlier this month, we had the opportunity to visit the main kitchen and talk with Tanya Koshowski, Executive Director of Brown Bagging for Calgary’s Kids.

We were also fortunate to catch up with Reis, Rey, Lauren, and Madeline, students who are participating in a  Youth and Philanthropy Initiative(YPI) project.  YPI is an inclusive, multi-award-winning secondary school program that grows compassionate communities by connecting youth to social issues, local charities, and philanthropy at a pivotal stage in their adolescence.

Over the past thirteen years, the Toskan Casale Foundation, together with The Wood Foundation in Scotland, and  generous funders on both sides of the Atlantic, have grown YPI into an international multi-award-winning social service program that has directed over $12 million in grants to charities across Canada, the United Kingdom and New York City, 100% through the choices of over 400,000 informed and empowered secondary students.

On today's show we listen to the second part of our interview with Peace Fund Radio Hero of the Week Lawrence Jia and Kimberly O'Keefe brings us some updates on our past Heroes.

Lawrence, a high school student, always had a head for numbers, and he wanted to use that talent to help others. At fifteen, he started Money Matters, an organization that provides basic financial education to students. He believes that money management is one of the most practical and useful skills taught in school. By providing introductory financial education to younger students, he hopes to lay a foundation for good monetary decision-making.

Through weekly and bimonthly student-led workshops at various after-school programs in Virginia and annual international missions trips to Inner Mongolia, they use proven curricula to teach basic personal finance material. Not only dedicated to improving financial literacy rates, they also stress college preparedness and the importance of education through encouragement lectures.

Overall, they impact approximately 300 students on a weekly basis directly, over 800 students in Inner Mongolia, and over 1,000,000 students through online lectures thus far.  As a guest lecturer at Tsinghua University in Inner Mongolia, his online lectures about the American banking system and monetary policy have reached more than 1 million students. In the coming year, partnerships with literacy organizations in New York City will allow an additional 200 students to receive financial literacy education in juvenile detention centers, specifically focusing on Brookwood Secure Juvenile Center.

Lawrence is the winner of the 2017 Virginia Governor's Volunteerism and Community Service Award for Outstanding Youth Volunteer.