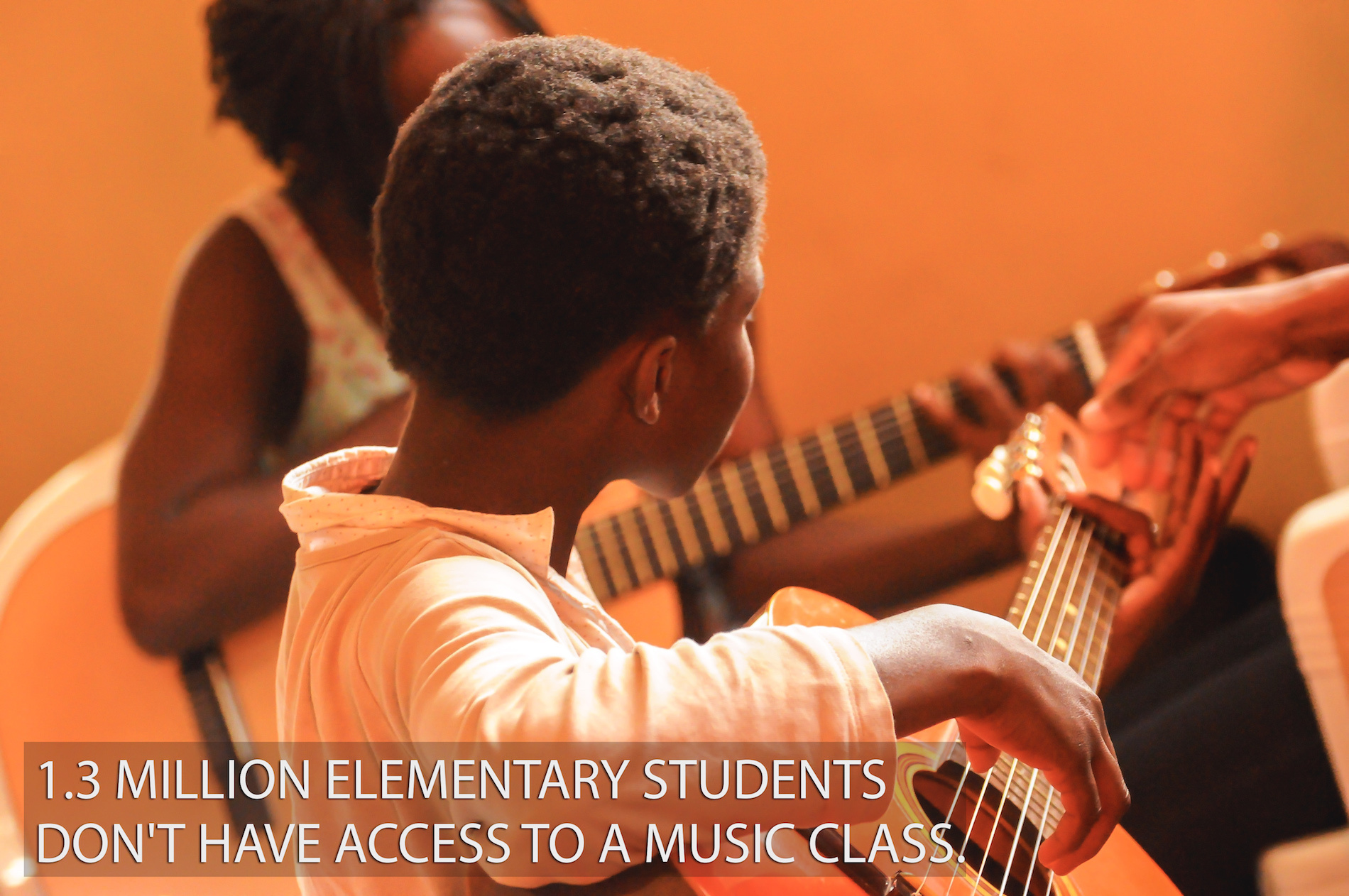 I would teach children music, physics, and philosophy; but most importantly music, for in the patterns of music and all the arts are the keys of learning." – Plato

Budget cuts and a narrow focus on those subjects that are measured on standardized tests have resulted in a vast reduction of public school arts programs across the country. The deterioration has been significant in higher poverty schools.

Think back to when you were in elementary school. In between doing all the dittos and spelling tests and times tables, there were specials. Nothing was quite as exciting as putting on your smock for art class or pulling out the wooden recorders for music. And remember when it was time for your class to put on its yearly play? Whether you starred as Snow White or donned a furry costume as Woodland Creature #7, school couldn't get much better. And that was the whole point.

These days, however, not only are many kids lucky if they have art-on-a-cart, but when they do, proponents often have to justify the programs in relation to students' performance on standardized reading and math tests. Because in the age of No Child Left Behind (NCLB) and Every Child Succeeds Act, few things matter more than test scores.

Music and arts classes are now out of reach for many. A decade ago, 100 percent of high schools where 76 percent or more students qualify for free or reduced lunch – a key indicator of poverty – had a music class.  Today this number is down to only 70 percent and it continues to decline.

Arts and music education programs are mandatory in countries that rank consistently among the highest for math and science test scores, like Finland, Japan, Hungary, and the Netherlands.  Music programs are constantly in danger of being cut from shrinking school budgets even though they're proven to improve academics.

Throughout history, our greatest inventors and scientists have merged scientific knowledge and discovery with artistic creativity. For example Albert Einstein studied piano and violin as a child and, when he was an adult, music helped him think things through. When he was having trouble with a scientific theory, he would strike a few chords on the piano or pick up the violin and play, and that would often free up a constructive thought or solution. He stressed the importance of the creative mind, once saying, "I'm enough of an artist to draw freely on my imagination, which I think is more important than knowledge. Knowledge is limited. Imagination encircles the world."

Music is one of the few activities that involve using the whole brain. It is intrinsic to all cultures and has surprising benefits not only for learning language, improving memory and focusing attention, but also for physical coordination and development.

First developed at the University of Michigan in 1944, music therapy has long been used to help people with conditions such as depression, anxiety, or post-traumatic stress disorder.    Doris Jeanette, a psychologist in Philadelphia, says  “Music is an age-old way to heal, and it works exceedingly well for children with ADHD.  Music reduces the anxiety you have in your body, and when you’re talking about kids with ADHD symptoms, all they have is anxiety.”

Music is calming, and calmed children with ADHD are better able to focus and pay more attention to what they are doing.  Music therapy has become one of the recognized ADHD alternative treatments.

Even though arts programs were slashed nationwide, schools with higher concentrations of impoverished students or minority students suffered the most.  Most of the schools that serve low-income students already have reduced budgets due to the recession and its aftermath. In addition, as many schools in poor neighborhoods are considered low-performing, they face an intense pressure to meet standards through Math and English language tests.

And it's not like putting all the focus on nonstop test-prep is having the desired effect. Test scores have failed to rise as hoped. Meanwhile, Hong Kong as well as Japan, Canada, Finland, and five other countries that consistently outperform us in math and reading all require extensive education in the arts without narrowing their curriculum. National guidelines in Hong Kong recommend that fourth-graders visit artists' studios and study great works of sculpture and painting; in Ontario, Canada, learning musical composition and conducting are standard for eighth-graders.

In our schools, arts instruction has become even less of a priority, and may be significantly reduced or completely cut from the curriculum. Arts programs in schools that have a large number of low-income students are also rarely restored. While more affluent school districts can rely on private funding to still provide education in the arts for students, or parents can simply pay for after-school classes, children in poor neighborhoods most likely don’t have those options. This scenario creates disparities in access to arts education between communities.

With all of the challenges plaguing schools today—including those that surround the academic achievement gap between rich and poor students—it may seem frivolous to focus on extracurricular participation. But studies show that outside experiences have just as much impact on a child’s life as the classroom ones.

Lawrence Jia was devastated as he comforted his friend who had just lost his home due to foreclosure. After researching the topic, he found that financial literacy was directly correlated to less crime and divorce, and greater emotional and mental stability, salary and personal fulfillment.

The high school student always had a head for numbers, and he wanted to use that talent to help others. At fifteen, he started Money Matters, an organization that provides basic financial education to students.

Through weekly and bimonthly student-led workshops at various after-school programs in Virginia and annual international missions trips to Inner Mongolia, they use proven curricula to teach basic personal finance material. Not only dedicated to improving financial literacy rates, they also stress college preparedness and the importance of education through encouragement lectures.

Overall, they impact approximately 300 students on a weekly basis directly, over 800 students in Inner Mongolia, and over 1,000,000 students through online lectures thus far.

On today's show, John Bierly had the opportunity to talk with Lawrence about his organization.