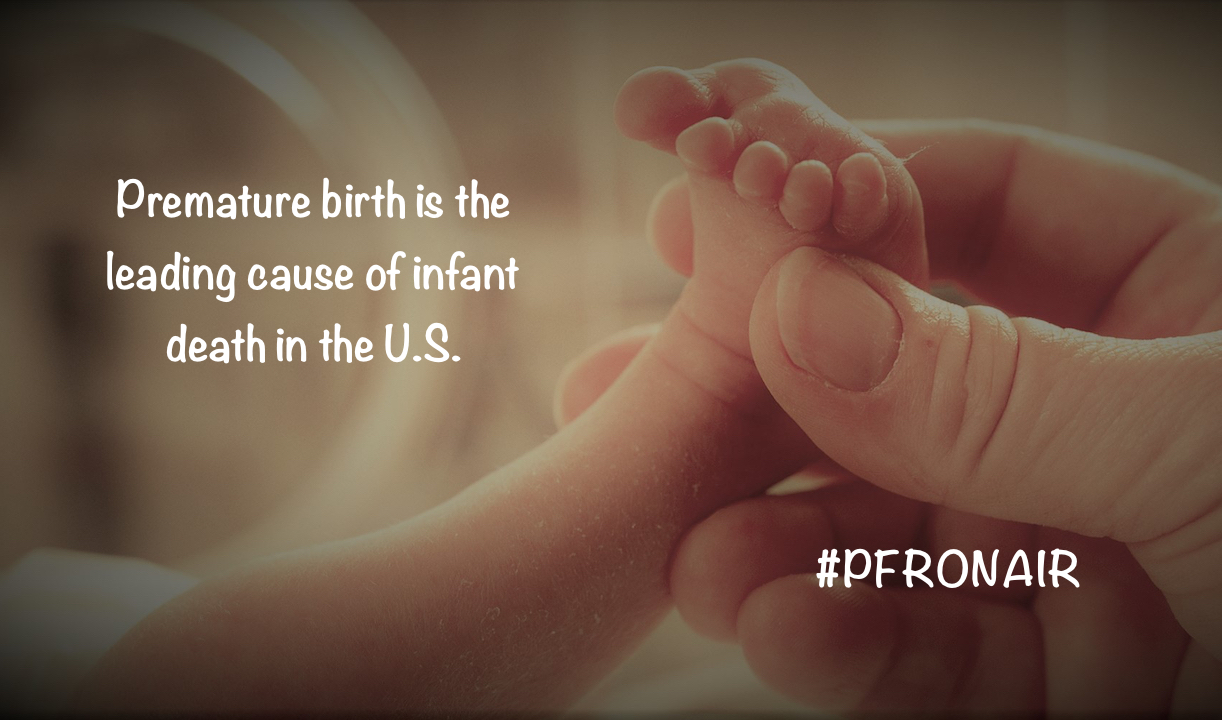 In the United States, about 380,000 babies are born prematurely each year.

Important growth and development occur throughout pregnancy—including in the final months and weeks. The earlier a baby is born, the higher the risk of death or serious disability. Those born before 32 weeks (about 16%) are known as very preterm babies…they are very small and may not be ready to survive outside the womb. Prematurity accounts for 36 percent of all infant deaths in the United States.

Babies who survive often have long-term health problems, including cerebral palsy, intellectual disabilities, chronic lung disease, blindness and hearing loss. Long-term problems may include developmental delay (not meeting the developmental milestones for his or her age) and lower performance in school. Sadly, prematurity is also the leading cause of death for newborns. Many who survive enjoy typical health and development but some who survive face lifelong problems including cerebral palsy, breathing and respiratory problems, vision and hearing loss, feeding and digestive problems and intellectual disabilities.

Some babies will require special care and spend weeks or months hospitalized in a neonatal intensive care unit (NICU). The NICU is a special, caring environment for sick and premature babies, with specialized equipment designed for infants and a hospital staff who have special training in newborn care.

And this brings us to today’s charity - Variety – The Children’s Charity of Southern California.  On today’s show we talk with Elizabeth O’Neil, Executive Director of the organization and Erica Lopez, Executive Director of Variety Children's Charity of the United States.  Among its many other programs in the Southern California chapter, Variety supports a wide range of neo-natal intensive care equipment for hospitals in under-served communities to ensure that the tiniest of children receive the best care possible.

Variety of Southern California focuses on three major areas of funding: Healthcare, Education, and Mobility. Within each of these three areas, Variety works hard to make sure that they get the greatest benefit possible from every dollar they receive.

Children battling illness need relief from the pain and chaos of treatments. Variety supports camps and programs for kids affected by HIV/AIDS, Cancer, and other life threatening illness.  They also support organizations which provide safety, help, and hope to children who are victims of abuse, neglect, and homelessness.

Variety’s Mobility Program steps in where insurance and other funding step out because no child should miss out on the simple pleasures of childhood when his or her family cannot afford the necessary equipment.

We caught up with Zachary Levi at the Salt Lake Comic Con earlier this month.

He grew up all over the country before his family put down roots in Ventura County, California. At the early age of six, Zachary began acting, singing and dancing in school and local theater productions.

After graduating from Buena High School, he headed to Los Angeles to pursue his dream of acting. Zachary began acting in theater, performing roles in such regional productions like Grease, The Outsiders, Oliver, The Wizard of Oz and Big River. It was his portrayal of Jesus in Ojai's Godspell that brought him to the attention of Hollywood.

While many of you know him for his work in Tangled, Chuck and Thor: The Dark World, Zachary is also a hero to many children born with cleft lip & cleft palate through his support of Operation Smile.

For many families in developing countries, early surgery may not be an option, due to lack of financial resources, qualified medical staff and other factors. Since 1982, Operation Smile has been dedicated to finding these families around the world and providing them with surgery so they can live happy healthy lives.

Zachary created Nerd HQ as a sanctuary for pop culture fans who make the annual pilgrimage to San Diego Comic Con. He’s turned to fellow Hollywood actors to volunteer for intimate Conversations for a Cause panels, which are limited to just 200 seats but are live-streamed to the world via IGN. Every penny from these panels is donated to Operation Smile. To date, Nerd HQ has raised over $795,000 for Operation Smile.

Kaitlyn Martinez, now 13,  came up for the idea for her organization in 2015 when her friend, a member of the Arizona foster system, couldn’t complete a school assignment due to a lack of the proper supplies. After turning the idea over with her mom, Kaitlyn created a Facebook page for Backpacks 4 Kids AZ.

She then asked her school and church if she could set up donation boxes.
She spent the summer creating flyers for her School Supply Drive and posting them everywhere, asking family and friends for help.  By the end of the summer she had collected enough school supplies for the 175 students at her school.

Now a 501(c)3 charity, her organization provides “Love Bundles” (backpacks full of toiletries and toys) to children displaced by abuse, neglect, abandonment, or rocky foster care experiences, as well as backpacks full of school supplies for low-income public school students.  Kaitlyn has built a team of volunteers and a board of advisors who believe in her mission.

This year she expects to reach her goal of providing 1,000 students with backpacks full of school supplies. She’d also like to join forces with other non-profits to better impact Arizona’s disadvantaged youth.  Kaitlyn hopes to be able to place donation boxes in stores like Walmart.