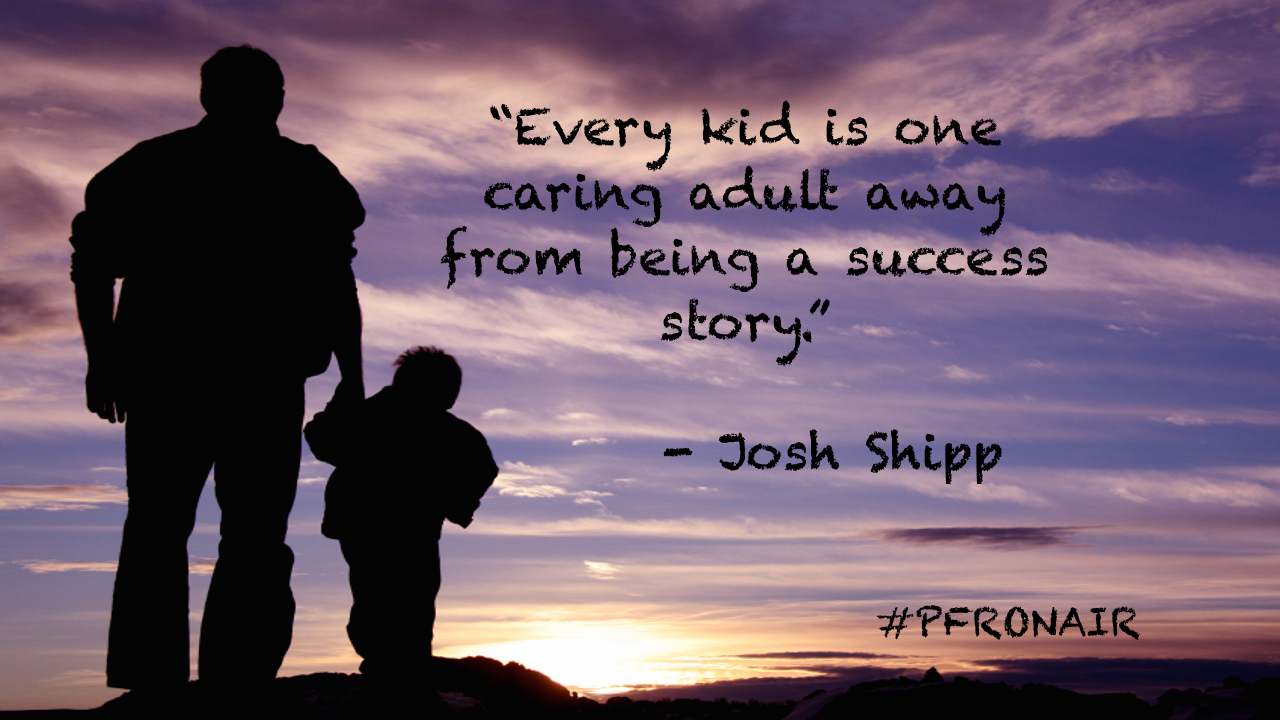 1 in 3 young people will grow up without a mentor.

We understand the benefits of mentoring young people when we hear the powerful stories of teens whose lives have been changed by a single, caring adult. If you listen, those stories are everywhere.

Mentoring relationships can be formal or informal with substantial variation, but the essential components include creating caring, empathetic, consistent, and long-lasting relationships, often with some combination of role modeling, teaching, and advising.

Mentors become more than just a friend – as they provide an atmosphere of family and a feeling of belonging that all kids search for. With this, kids are able to better understand how bad choices will affect them negatively in the future, and how relationships with dangerous people can lead them down a destructive path.

These mentoring programs have succeeded so well in schools and communities across the country that they are also being considered and used where the juvenile justice system is concerned. Other options for juvenile offenders are adult courts and boot camps, but research has shown that mentoring programs, over the long-run, provide better outcomes than any of the other options for these juvenile offenders.

Those in the juvenile justice system believe that the juvenile offenders have been failed by both their schools and their communities when they turn to crime, drugs, and violence.

A five-year study sponsored by Big Brothers Big Sisters Canada found that children with mentors were more confident and had fewer behavioral problems. Girls in the study were four times less likely to become bullies than those without a mentor and boys were two times less likely. In general, young people showed increased belief in their abilities to succeed in school and felt less anxiety related to peer pressure.

Nonparent mentors – teachers, clergy, and civic leaders – are highly instrumental in how these teens learned to believe in themselves and tackle challenging goals – much like those in the Big Brothers Big Sisters study.

We know that mentoring is particularly beneficial to disadvantaged teens. A study conducted by North Carolina State University showed that youth from disadvantaged backgrounds are twice as likely to attend college when they have a mentor, particularly a teacher. It also showed that less than half of disadvantaged students have any adult mentor and that only seven percent named a teacher as a mentor.

A study of African American youth conducted by the University of Georgia showed how important mentors were to teens with hardships. For example, young people who had experienced discrimination, family stressors, and abuse were less likely to break the law or engage in substance abuse if they had a positive mentoring relationship. Again, their mentors provided the relational support to help them belief in their abilities and overcome difficult life challenges.

For more than a century, Big Brothers Big Sisters has been helping change kids’ perspectives and giving them the opportunity to reach their potential.

It all started in 1904, when a young New York City court clerk named Ernest Coulter was seeing more and more boys come through his courtroom. He recognized that caring adults could help many of these kids stay out of trouble, and he set out to find volunteers. That marked the beginning of the Big Brothers movement.  At around the same time, the members of a group called Ladies of Charity were befriending girls who had come through the New York Children’s Court. That group would later become Catholic Big Sisters.

Every year, Big Brothers Big Sisters of Los Angeles impacts more 1,500 youth through five unique mentoring programs that serve children and youth in their communities, schools, and in the workplace. By building a strong, one-to-one and professionally-supported mentoring relationship to serve as a foundation for transformative impact and life skills learning, BBBSLA’s innovative approaches to expanding mentoring opportunities help to close both the achievement and opportunity gaps that exist for too many underserved children and youth.

Actress Elizabeth Gracen has proven the old adage "the pen is mightier than the sword" as she has launched a new career as an author.  She played sword wielding temptress Amanda in the Highlander series.  Last May she published her debut novel, Shalilly, a piece of young adult fiction.

For those of you who aren't familiar with LIzzie, she's got many accomplishments; former Miss America, author, actress and film-maker.

She has now established her own publishing and film production company, Flapper Films LLC, dedicated to producing inspirational content that encourages people to grow and live authentic lives.  Elizabeth has written and directed films with women, teens and kids, including the series The Perfection of Anna.

Her documentary short, Dance for Joy, played at the Hollywood International Independent Documentary Awards last December. Dance for Joy is an inspiring documentary short film that celebrates the healing movement classes offered by the Mark Morris Dance Group and the Lineage Dance Company to help people with Parkinson’s Disease find freedom, hope and a sense of community through the arts.

Elizabeth has team up with Kate Canada in a new documentary, The Future Speaks.

The Future Speaks explores kids and families who are passionate about what is going on in our country and/or who have participated or will participate in public demonstrations and marches.

Today’s youth are more self-aware, success-driven, socially-responsible and more globally-minded than any generation before them.  The current generation’s approach to tackling social issues is different to that of previous generations and often goes unrecognized.

Kate Canada Obregon, PhD and Elizabeth Gracen will interview kids between 10 -18 years old and their families around the United States.

During these on camera interviews, they will be asked about their motivations, emotions, opinions and viewpoints on the most recent election and politics. What issues or ideas matter to them? How do they plan to speak up in the future? The documentary will focus on how these future citizens hope to shape their country and politics when they are adults.

Moving to the United States from India as a child, Adi Sidapara experienced the struggles of adjusting to a new society. Having moved by choice, he felt compassion for refugees who had been forced to relocate, disadvantaged by cultural and educational differences. Recognizing technology as an equalizing force in today’s world, he and his peer Omron formed Refugee Code Academy. Through computer science and entrepreneurship training, events, job placement and mentorships, they equip refugees with the tools and education to succeed in their new homes.

They connect refugee students with programming education in order to lift them out of dire economic/political circumstances and allow them to express themselves on the modern canvas: technology. Students who learn to program become better architects of their future and can express themselves creatively with coding projects. They relish the challenge to become creators of technology and be active participants instead of passive consumers. In addition, the computational thinking skills that underlie coding will allow them to continuously adapt to our increasingly data-filled world. Just like a second language, programming concepts are best learned young. In addition to equipping their students with the necessary tools to innovate, they also train them vocationally to obtain high-paying software engineering and design jobs at startups across the world.

Hundreds of refugees in Arizona have participated in their events, and by involving their communities in this process, Refugee Code Academy is replacing cultural clashes with collaboration.

The Academy has recently garnered support from over a dozen entrepreneurship hubs across sub-Saharan Africa to educate refugees and connect them to western tech companies. Moving forward, Adi is further developing the Academy’s mentorship program and spreading outreach to engage even more refugees.