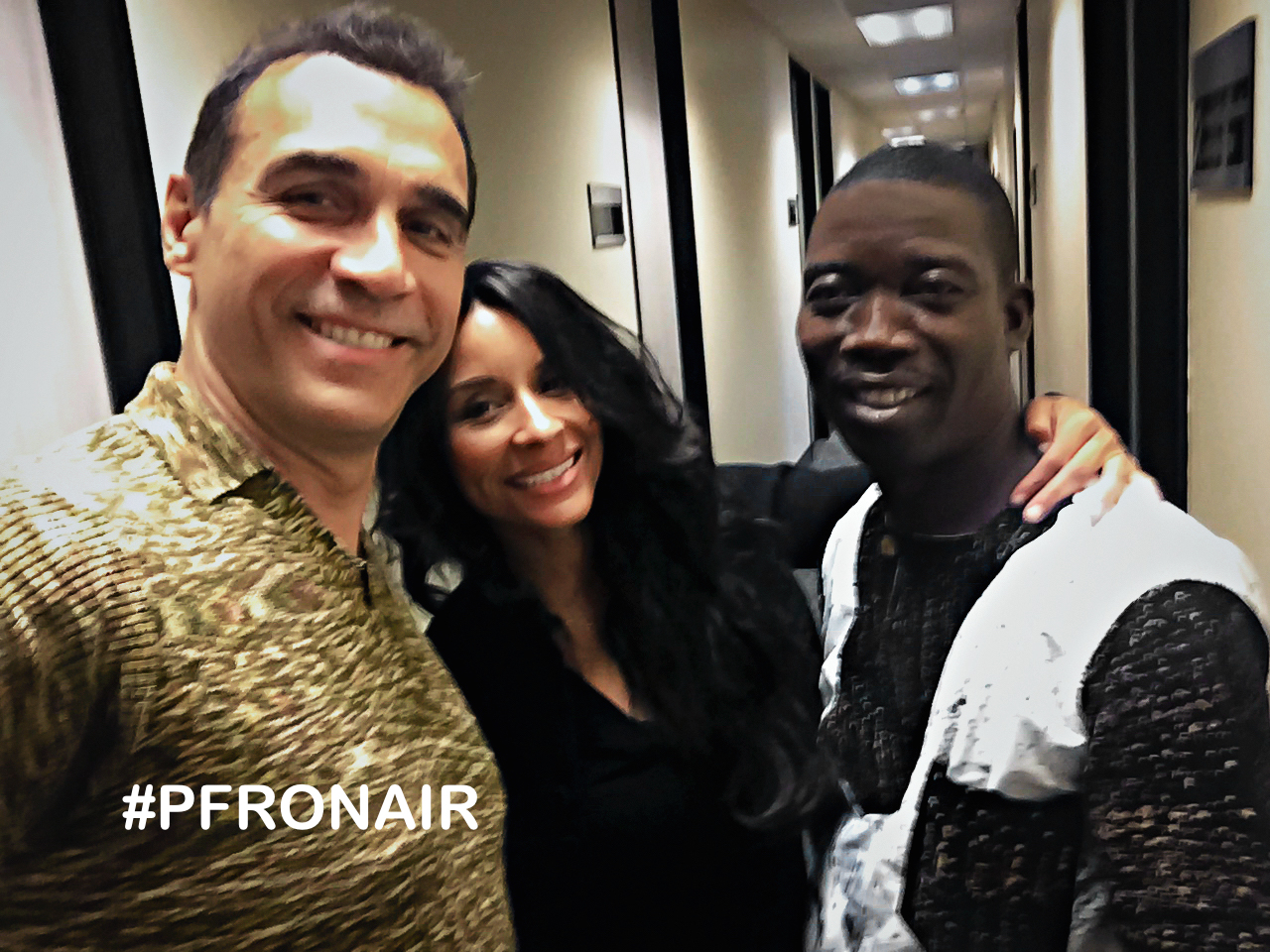 On today's show we are joined in the studio by our guests Dr. Jerry Brown and Baroness Kimberly Moore.

Baroness Kimberly Moore is an active entrepreneur from New York City and Goodwill Ambassador to the United States, best known for using her creative energy in raising funds and awareness for a variety of industries around the world.

She founded "The Kimberly Moore Foundation" and created a great number of programs and campaigns well recognized in the media, benefiting children and families in her own community and around the world..  Her programs include Adopt a Letter, Adopt a Country, Keeping Harmony Alive and many more.  As many of you may remember, in December 2015 The Peace Fund partnered with Kimberly Moore Foundation’s Adopt-a-Light to bring light, books and computers to a village in El Salvador.  @kimberlymoorefoundation

In August 2016 the Kimberly Moore Foundation partnered Norman Ebenezer, founder of "A New Dimension of Hope" charity to help bring education to the children of Liberia, West Africa with a focus on girls education. It is stated that only 13% of children in the country have access to education. As of November 2016, the Kimberly Moore Foundation had opened 5 new Learning Centers in 5 different cities in El Salvador.

Our next guest, Dr. Jerry Brown, is the Medical Director and General Surgeon at the Eternal Love Winning Africa [ELWA] Hospital in Monrovia and was the director of the ELWA 2 Ebola treatment center.

Dr. Jerry Brown is a Liberian surgeon who converted his hospital's chapel into one of the country's first treatment centers during the Ebola outbreak. Dr. Brown was named a Time magazine “Person of the Year” in 2014 and was named one of Time Magazines “The 100 Most Influential People”.

He took action and stopped people from dying of Ebola. Through his work as medical director of the Eternal Love Winning Africa Hospital in Monrovia, Liberia, and in the face of skepticism and misunderstanding, he trained, taught and treated waves of people who came to his hospital.  His courage and determination to fight this disease undoubtedly kept alive many health workers and helped communities fight this deadly virus.

Dr. Brown is also an advocate for children's education.

Dr. Jerry Brown and Baroness Kimberly Moore were both honored with a New Dimension for Hope's 2nd Annual "Leaders Overcoming Obstacles to Peace" awards on June 3 at Regis University in Denver, Colorado.  A New Dimension of Hope is a nonprofit organization that addresses the issues of poverty and illiteracy as it pertains to less fortunate children around the world.  Their mission is to give children in less fortunate countries unlimited opportunities to improve their reading, writing and computer skills thorough technology education. They strive to be a part of transforming the education of millions of children in the most under-served villages around the world.

Many around the world were shocked as we watched the Ebola crisis unfold. One man, Dr. Jerry Brown, watched too. He took action and stopped people from dying of Ebola. Through his work as medical director of the Eternal Love Winning Africa Hospital in Monrovia, Liberia, and in the face of skepticism and misunderstanding, he trained, taught and treated waves of people who came to his hospital. In December 2014, Brown was named person of the year by Time Magazine for his work fighting Ebola, which remains a threat but is no longer spreading at the rates once feared. The efforts of Brown and his staff at Eternal Love Winning Africa Hospital saved hundreds of people who contracted the disease, and perhaps untold thousands who never got it because of the hospital's containment efforts.

According to Dr. Brown, the very first challenge he had as medical director at that time was that if they started having Ebola patients show up in their emergency room, where would they keep them.  The only place that came to his mind was our chapel...they didn’t have the financial capability to construct something. So they transformed the chapel into a holding unit for persons they suspected of  being a probable or suspected case, and then they would be transferred to the treatment unit. Before the end of June, the chapel, where they only had six beds, could no longer take additional patients because it was full to capacity. The initial intent of the unit in the chapel soon changed from a holding unit to a treatment unit. The chapel then became the first treatment unit in Monrovia.

Kimberly's story began nine years ago when she started the "Adopt a Letter" program and she personally answer letters to Santa Claus addressed to the North Pole written by thousands of needy children and families located in some of the most impoverished areas of Los Angeles and fulfill their Christmas wishes. Adopt A Letter has become a year round program providing underpriveleged kids with backpacks, school supplies, groceries, clothes, shoes, help covering ACT test, caps, gowns, computers and more.

Ms. Moore experiences vary from building educational programs for children, coordinating concerts for young musicians to organizing a great number of events for some of the world’s most influential leaders. She has raised awareness and proceeds for a variety of causes.

In June 2015, Kimberly introduced her Adopt A Country program and went to El Salvador, known as one of the most dangerous countries in the world, to learn the needs of those living in extreme poverty and worked with NGO's on the ground to help create sustainable programs targeting medical, health, education, agriculture and clean drinking water.

In September 2016, she adopted the country of Liberia, West Africa to help bring in sustainable solutions to a village comprised of 3,000 residences, many of which were devastated by the Ebola crisis. Kimberly Moore Foundation in partnership with A New Dimension of Hope have plans to build a series of girl friendly schools tailored to the needs of the people in the community. Kimberly has become a recent advocate of girls education and educating women living in disadvantage villages on the important benefits of allowing their girls to go to school.

Emerging infectious diseases (EIDs) represent an ongoing threat to the health and livelihoods of people everywhere. Over the last few decades, there have been several EIDs that have taken the global community by surprise.

The global health threats posed by recent viral epidemics, such as avian flu, H1N1, Ebola and Zika, have been happening too frequently to be dismissed as coincidental. Unless the global public health community invests in and develops better health systems that provide for the poor, such viruses will continue to spread and have severe effects.

The  2014-2016 West Africa Ebola outbreak took the world by surprise.   It is thought that fruit bats are natural Ebola virus hosts. Ebola is introduced into the human population through close contact with the blood, secretions, organs or other bodily fluids of infected animals such as chimpanzees, gorillas, fruit bats, monkeys, forest antelope and porcupines found ill or dead or in the rain forest.

Ebola then spreads through human-to-human transmission via direct contact with the blood, secretions, organs or other bodily fluids of infected people, and with surfaces and materials (e.g. bedding, clothing) contaminated with these fluids.

As indigent populations are forced deeper into forested areas to look for food, there is an increased interaction between human and forest animals.  This increased interaction is thought to be behind the spread of Ebola. Human beings were never the primary target of the virus. While the exact reservoir of Ebola viruses is still unknown, researchers believe the most likely natural hosts are fruit bats, which live in the tropical rain forests of central Africa.

On today's Hero of the Week segment, John Bierly talks with one of our earlier heroes, Kendall Ciesemier.  This Georgetown grad is the founder of Kids Caring 4 Kids, an organization she started at 11 years old and the co-founder of OWN IT, a series of game-changing summits, events, and opportunities meant to inspire young women. Now that she has closed her chapter at Georgetown, Kendall has moved to New York City, where she is Norah O’Donnell’s assistant at CBS This Morning.

While attending Georgetown University she co-founded OWN IT, a national women’s leadership initiative that seeks to empower and inspire college women by providing a venue for them to meet and engage with female leaders of the 21st century. Reaching over 3,000 young women and over 300 high profile and nationally-recognized female leaders, we produce game-changing summits that focus on leadership, diversity, accessibility and feminism.

Most prominently she has been honored as the 2014 Glamour Magazine College Women of the Year Grand Prize Winner, a Chicagoan of the Year by Chicago Magazine, Zeitgeist Young Mind by Google, and one of Youth Service America’s “Top 25 Most Powerful and Influential Young People.”