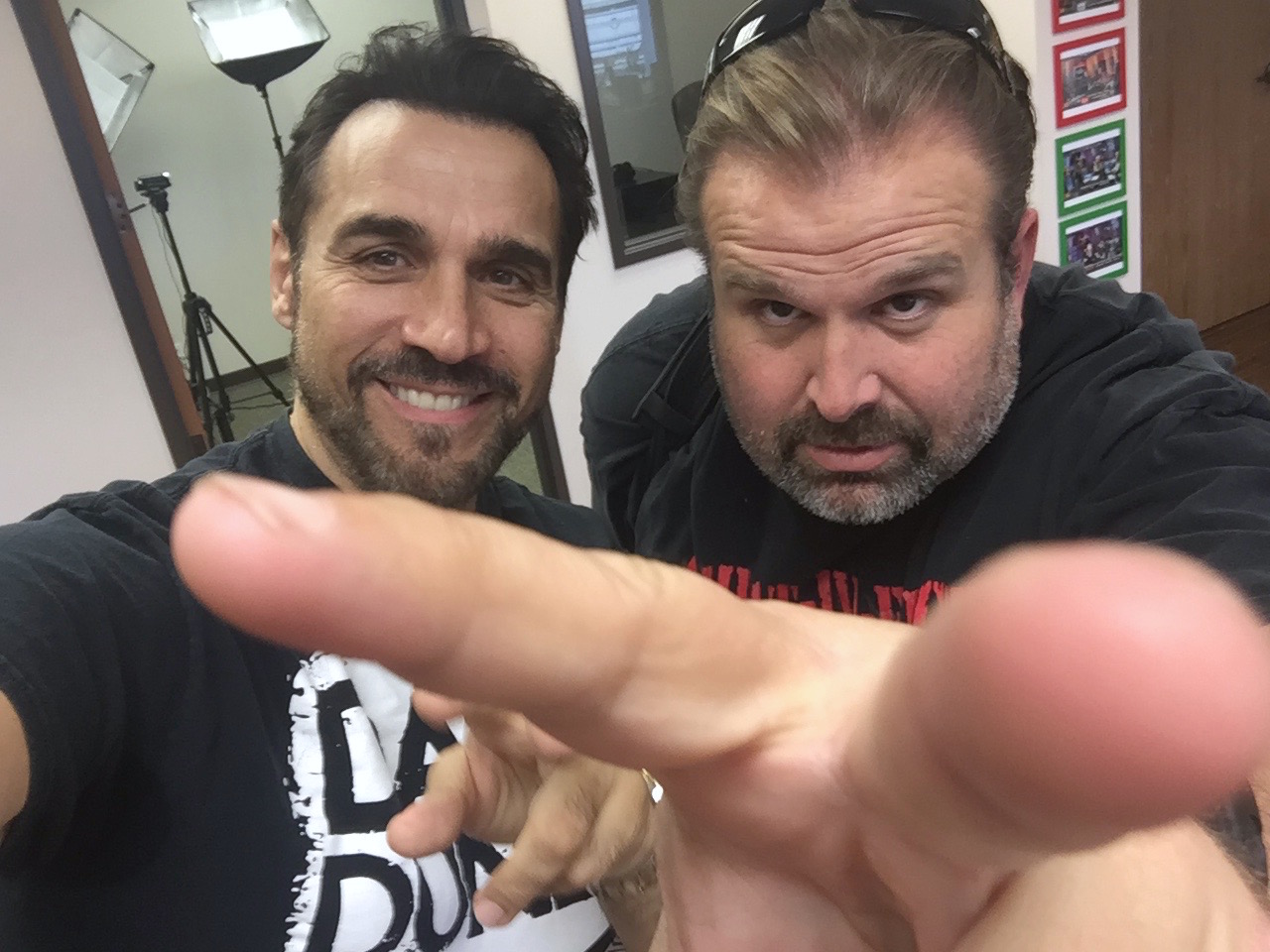 On today's show we recap some special moments from episodes of 2016.

In a special episode of Peace Fund Radio, Adrian Paul and Ethan Dettenmaier present on-the-scene coverage and interviews from La Motte Elementary School with their delivery of Microsoft Surface tablets to the winning classes in the Los Angeles Unified School District!

For children in low-income school districts, inadequate access to technology can hinder them from learning the tech skills that are crucial to success in today’s economy.  84% of teachers surveyed say that today’s digital technologies are leading to greater disparities between affluent and disadvantaged schools and school districts. Empowering kids to achieve their full potential is not just a snappy tagline – it is at the core of what The PEACE Fund does every day. And on Saturday 2/6, the PEACE Fund provided hundreds of Los Angeles area students the opportunity to leverage technology to enhance their education. In a socio-economic reality where students often have to share 1 device (PC, tablet, etc) among hundreds of their peers, getting only minutes on a device each week, these kids rarely have exposure to the learning benefits of technology. Educators struggle to find ways to prepare students for a future where the understanding, utilizing and reaping the benefits of technology can be the difference between a future above the poverty line or remaining below it.

In early 2013, nine-year old Rachel Ritchie approached her mom saying, “I have an idea.”  She envisioned a playground that would accommodate everyone, including children who have physical limitations that often prohibit their use of traditional playground equipment.  Rachel had the support of her parents to go and try and talk with the Vine Grove Council. Her presentation included drawings, grant locations, projected cost evaluations, and her own ADA research. After she spoke and they seemed receptive to her ideas she said, “it felt awesome.” Rachel has a goal of trying to raise $100,000 and she’s on a mission to do exactly that. You name it she’s trying to do it. She’s getting support from local city officials in Hardin County, coordinating lemonade stands, yard sales, jewelry making, selling t-shirts and more.

Two years later, Rachel Ritchie’s passion and persistence for her project, Rachel’s Fun for Everyone, has connected hundreds of people who share Rachel’s desire to better our community.  By building the equipment, Rachel believes that all children can play together, without the fear of being teased because they can’t access the playground.

Craig and Marc Kielburger.  They’ve inspired millions to take action and make the world a better place. Meet the co-founders of Free The Children, WE Day and ME to WE—our family of organizations leading social change.

Humanitarians, activists and social entrepreneurs, Craig and Marc believe that together, WE can change the world. Over 20 years ago, they set out on a bold mission: to work with developing communities to free children and their families from poverty and exploitation. Their vision expanded to include empowering youth at home, connecting them with global issues and social causes, and partnering with schools to inspire young change-makers from within the classroom. And with the launch of ME to WE, they created an innovative social enterprise that provides products that make an impact, empowering people to change the world with their everyday consumer choices.

WE Day is a powerful, life-changing event that combines the energy of a live concert with the inspiration of extraordinary stories of leadership and change.  WE Day brings together world-renowned speakers and award-winning performers with tens of thousands of young people to celebrate their contributions and kick-start another year of change.

WE Day has evolved from a single event nearly eight years ago into a series of 14 stadium-sized events held across Canada, the United States and the UK. This past year, 200,000 students attended WE Day and left inspired to create change at local and global levels.

Renita Zaparde visited India with her family in the winter of 2012. She traveled through rural villages, and in one, met a small group of school girls walking by. That’s when Renita met Kusum: a 13-year-old orphan who walked three miles to school every day.

Many times, Kusum was on the brink of relinquishing her education—and her dream.  Renita knew she had to act. She had to help Kusum. After returning to New Jersey, Renita fundraised at her school, and on her next visit to India, gave Kusum a bicycle. Now, Kusum has more time to complete her schoolwork and focus on her education.

Renita realized that there were many girls like Kusum that she could help stay in school, and Pedal2Prosperity got rolling!  Pedal2Prosperity strives to help orphaned girls in India and Africa stay in school by providing them with bicycles. In many cases, these girls from remote villages have to walk five/six miles every day to attend schools in nearby towns.

66 million girls of primary and lower-secondary school age are out of school. Educated mothers are more than twice as likely to send their children to school.  Lack of hygiene is truly a global issue that affects girls receiving an education in developing countries.

With this in mind, Celeste Mergens founded Days for Girls during a trip to Kenya in 2008, when she discovered through discussions with young women that menstrual hygiene was a huge challenge.  Days for Girls International is a grassroots 501(c)3 non-profit that empowers women and girls in over 100  countries on six continents. Days for Girls has been featured in O Magazine, Forbes, and was recently named a Huffington Post ‘Next Ten’ organization positioned to change the world in the next decade. Celeste’s passion for this issue is infectious and she has helped bring international attention to an issue that has long been neglected.

Women, and girls discover their potential and self-value, are equal participants and agents of social change and are given opportunities to thrive, grow and contribute to their community's betterment while ensuring quality sustainable feminine hygiene. They are all about partnerships and joining hands. There are a lot of things in the world that are hard to change. This doesn't have to be one of them.  THIS we can change. Together.

Fifteen-year-old Hasan and 13-year-old Shireen Zafar started The Street School for homeless kids in Karachi, Pakistan, six months ago.  Students of grades 9 and 7 respectively, Hasan and Shireen, the brother sister duo, offer their teaching services to over 50 street children after they are done earning their day’s livelihood. For those unfortunate children who are unable to go to school, this duo has brought the classroom to them.

Shireen and Hasan Zafar teach more than 50 street children, who sell flowers and tissue papers or beg at traffic signals on the streets of Defence Housing Authority. The siblings set up tables and chairs near Café Clifton on Khayaban-e-Shamsheer and spend nearly two hours every day teaching the children basics, such as alphabets and counting. The street school runs six days a week from 4:30pm to 6pm. The duo found its current spot near Café Clifton and was able to maintain attendance at the classes for several weeks. Now some people have started helping them by providing juice boxes to the children along with providing a daily stipend of Rs50 to keep these children motivated.

Rana Yasmeen, a government school teacher of basic pay scale grade 15, also spares time from her busy schedule and helps Shireen and Hasan conduct classes. She said this is her attempt to help make the city more educated.

On average 160,000 children across the country don’t go to school because of fear of being bullied.  The 2014 CDC Teen Risk Behavior Surveillance report indicates that 22% of 9th through 12th grade students in the United States were bullied on school property and 8% had attempted suicide one or more times in the past twelve months. Bully victims are between 2 to 9 times more likely to consider suicide than non-victims, according to studies by Yale University.  Nationally, 14.8% of 9th through 12th graders reported being electronically bullied via email, chat rooms, instant messaging, websites or texting in the past twelve months.

Be Strong is reaching out into communities with motivational speakers that encourage and empower young people, parents, teachers and community stakeholders by sharing intimate stories of life challenges, survival, and hope.  They are working to uplift entire communities by tackling the real-world issues of student depression and suicide, and candidly discussing the devastating effects of bullying.

Adrian Paul hosted a Live Press Conference, following the event at the Forum. Panelists included motivational speaker Nick Vujicic, Inglewood Mayor James T. Butts, Be Strong Founder Roy Moore and others.  Nick, a man born without arms or legs, has lived an extraordinary journey from day one. Nick turned his adversity into inspiration to help others.

After listening to another Peace Fund Hunger Hero, Will Lourcey, speak about hunger at Miles’ Montessori School of Fort Worth, Miles Umscheiddecided that he wanted to help.

So 5-year old Miles started the project Meals for Miles, a food drive that resulted in more than 2,100 cans of donated food. Thanks to Miles’ efforts and community support, he was able to surpass his original goal of collecting 1,000 cans of food.

One of four children in Tarrant Area Food Bank’s service area experiences hunger.  During the school year many children rely on in-school breakfast, lunch and even dinner for regular nutritious meals. Once summer break arrives, access to those meals becomes challenging, causing dreams of play to shift to the back of a hungry child’s mind.

Support from community members like Miles will help North Texas children and their families gain access to the food they need to be strong and healthy.

We end our recap show with a song by Dalton Cyr.

Dalton was named as a National Ambassador to The Dream Factory,  the largest all-volunteer children’s wish-granting organization in the United States.The Dream Factory continues to operate all 34 of its local chapters with very dedicated volunteers.  The organization that does not limit its mission to children who have life-threatening illness. The organization believes children with chronic illnesses and disorders also suffer from substantial emotional and physical pain. They strive to provide hope and relief from the trauma and corresponding stress and depression that both the children and their families can endure on a day-to-day basis.

“I’m very honored and proud to represent The Dream Factory,” Cyr said. “Through my performances for Wolfson Children’s Hospital, I’ve met kids who work so hard just to survive. They inspire me. As a National Ambassador, I hope to help make more dreams come true and inspire people to start Dream Factory chapters when there isn’t one in their city or join in helping existing chapters.”