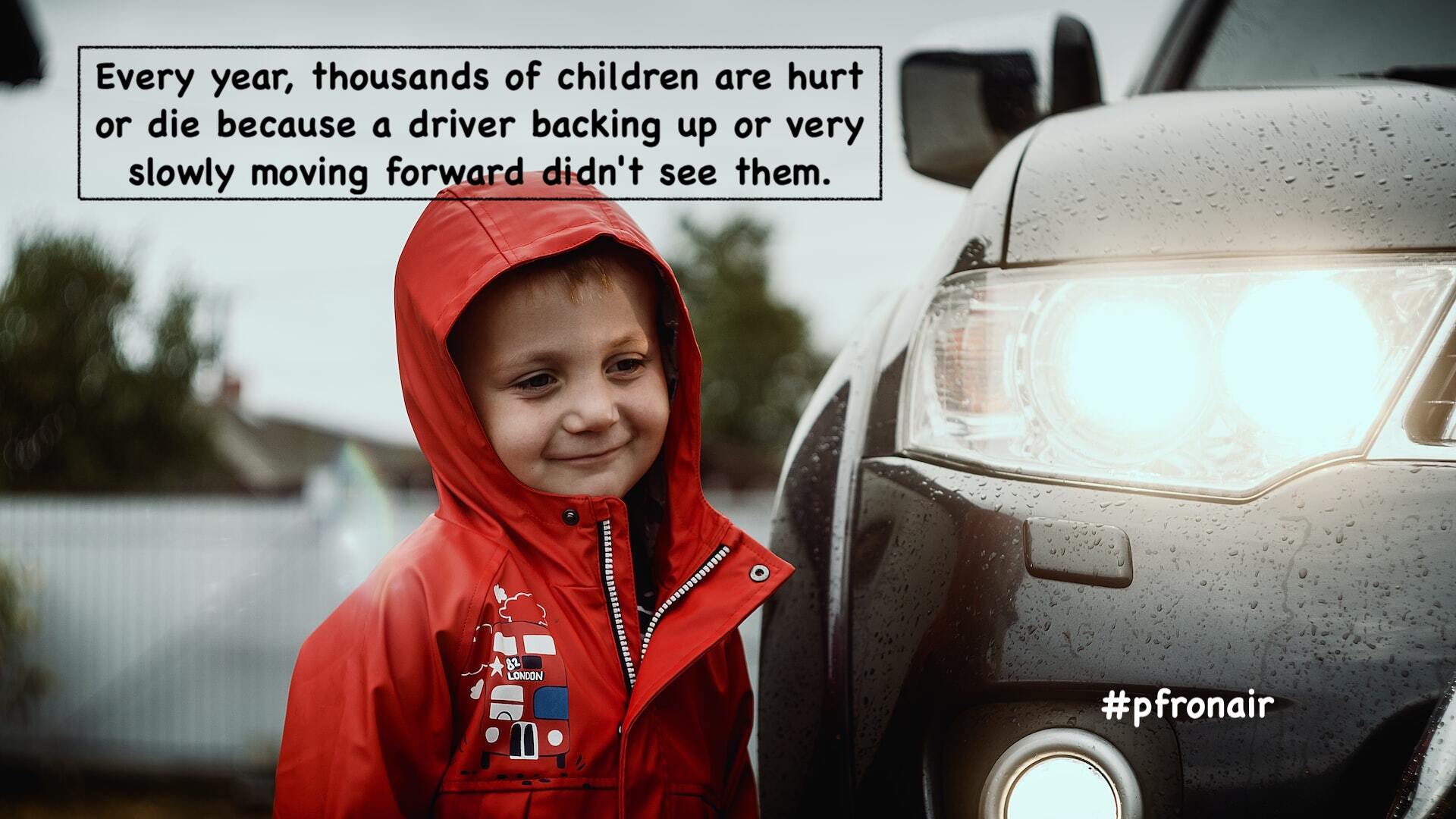 On today's show, we continue our discussion on keeping children safe in and around cars.

Road injuries are the leading cause of unintentional deaths to children in the United States.

Blindzones… every vehicle has them. A blindzone is the area behind, on the sides and in front of a vehicle where the driver cannot see even when looking back and using their rear and side view mirrors correctly. On average, most vehicles have a blindzone behind them that measures approximately 7-8 feet wide and 20-30 feet long.

In the U.S. at least fifty children are being backed over by vehicles every week. The predominant age of victims is 12 - 23 month-olds. A backover incident typically takes place when a car is backing out of a driveway or parking space.

Every year, thousands of children are hurt or die because a driver very slowly moving forward didn't see them. These incidents for the most part take place in residential driveways or parking lot.

Children do not understand the danger of a slow-moving vehicle; they believe if they see the vehicle, the driver can see them.

National statistics show that nearly three out of four car seats are installed incorrectly. However, nine out of 10 parents believe their children are appropriately secured.

5-Year-old Donates Everything He Has...30 Cents...to a Homeless Man, Teaching His Father a Lesson

Justice Smith and his 5-year-old were coming back from the dentist, when they saw a homeless man in the median strip in the road. Smith said on Facebook that he wanted to give the man some money, but didn’t have any cash.

His son Justus Mateo noticed the man as well and insisted that his dad give the man the 30 cents he had in his pocket. Justice didn’t want to give this man who clearly needed all the help he could get, just 30 cents. He admits that own pride and thoughts of the homeless individual’s unknown reaction to receiving just two coins was standing in the way.

He said later that this attitude would have showed his son that what he sees as a good thing, and is in fact a good thing, isn’t good enough to make a difference in someone’s life.

He then rolled down the window and said, “I’m sorry man, I don’t have any cash on me, but my son back here wants to give you everything he has now. He just turned 5.”

The smile on that man’s face lit UP the intersection and he said to Justus, ‘God bless you little man! Thank you so much!’”

Mr. Smith also believes that a chain reaction of kindness started behind them that day in Nashville, Tennessee, as other people rolled down their windows to donate, too.