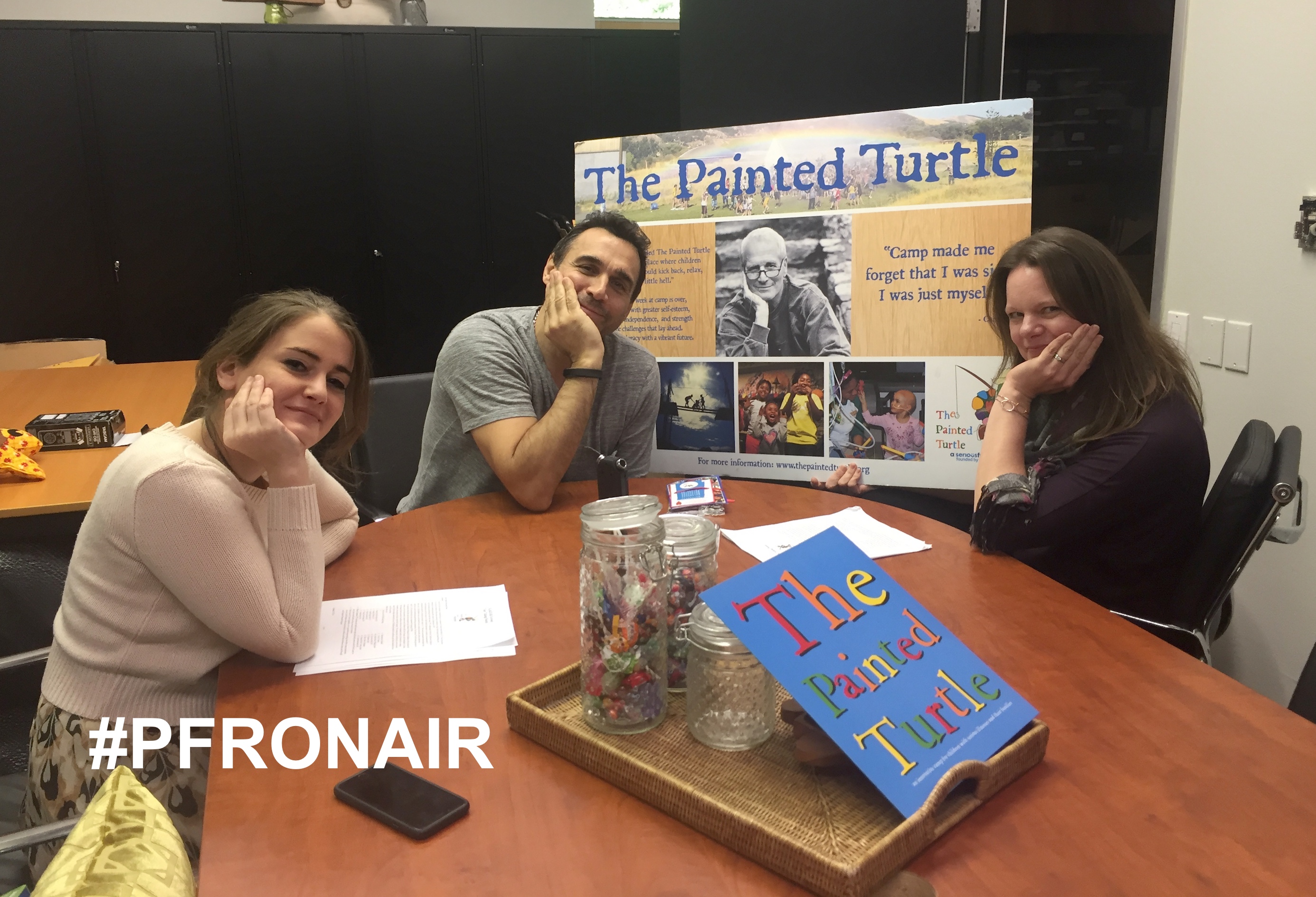 Guests today include Jessica Santos and Eliot Dreiband from a Los Angeles nonprofit, The Painted Turtle.   Our hosts Adrian Paul and Ethan Dettenmaier are joined by Erin Fitzgerald for today's discussion on the benefits of camps for seriously ill children and their families. Later in the show they tackle the issue of girl's and women's rights.

Chronic illnesses can be devastating to a person at any age. During childhood, it can be especially destructive for the child’s psychological growth and development.

Approximately 27% of U.S. children live with chronic health conditions that can affect their daily lives and normal activities. These maladies often contribute greatly to school absenteeism and require continual medical attention.  Many studies suggest chronic health problems, along with learning and developmental disorders, appear to be on the rise.

Children with chronic illnesses and disabilities often deal with more stress than other children. Stress is a part of life. It motivates us to succeed, but it can also interfere with life's joys and accomplishments. These children may have to cope with an imperfect body, frequent hospitalizations, painful injections, surgery, or even premature death.

Children with illness are not defined by their illness. They’re kids. They want the same things as other kids: they want to feel like they belong, they want to make friends and attend school; they want to have fun and feel good about themselves.

Since childhood cancer has evolved from an inevitably fatal illness to a life-threatening chronic disease, children with cancer receive many positive benefits by participating in a camp experience. These children can have a variety of limitations, but first and foremost, they are still children— and want to be treated the same as children without cancer with opportunities to run, play, swim, and enjoy being with other kids.

Through the camp experience, they can learn many of the skills necessary to meet the extraordinary challenges that they will face while fighting their disease and the everyday struggles of life.

Summer camps, week-long retreats, or weekend gatherings can be a wonderful way for children, adults, and families to come together to experience new adventures, find support, and learn something new about themselves.

Camp allows children the opportunity to be themselves by allowing the focus to be off of their disease and on meeting friends, swimming, sailing, horseback riding, and making crafts. By participating in enriching camp experiences, these children are able to gain confidence in themselves and learn activities that they can carry with them throughout their lives.

While at camp, children are able to develop skills and abilities as well as see that they are still able to do many of the same activities as everyone else.

When a child is diagnosed with a serious illness, the entire family changes and is faced with severe distress. Anxiety rises and resources are stretched in the face of the life-threatening nature of the illness and its intense and unpredictable treatments and effects. The focus through treatment is necessarily on the child with the illness, yet siblings are typically left in a vulnerable position. Siblings can be referred to as the “forgotten grievers”

As the brother or sister of a child with a chronic disease, a child can sometimes feel left out of things. But there are special summer camps out there just for siblings… great camp programs, free of charge! Finding people who understand what siblings going through can make a world of difference… for a lifetime.

Almost three decades ago, Paul Newman started a free camp where kids could escape the fear and isolation of their medical conditions and, in his words, "raise a little hell." This remarkable concept sparked a quiet movement, and that one camp launched a global network. Today, there are 30 camps and programs serving the needs of children and families around the world.

SeriousFun Children's Network collaborates with international organizations to implement locally designed, culturally relevant programming in the countries listed below. For children who have been marginalized by their medical condition, camp serves to inspire and empower through therapeutic play and education.

Their mission is to create opportunities for children and their families to reach beyond serious illness and discover joy, confidence and a new world of possibilities, always free of charge.

An this brings us to today's charity...

The Painted Turtle is located in Los Angeles.  Through innovative, camp-based programs that offer a great big dose of fun and support, children with more than 73 medical conditions visit The Painted Turtle each year, reclaiming the joys of childhood.   A member of Paul Newman’s renowned SeriousFun Camps (formerly the Association of Hole in the Wall Camps), The Painted Turtle has served over 47,000 children and their families through its Summer and Family Weekend camps since it opened its gates in 2004.

There is no billing department at The Painted Turtle—campers and their families attend free of charge. And there’s no limit to the amount of laughter campers take home with them either!

Their on-site medical support allows them to provide a unique and safe camp experience to children with special medical needs. Recent groups served include children with spina bifida and paraplegia, cerebral palsy and limb deficiency, rheumatic diseases, skeletal dysplasia and mucopolysaccharidosis, kidney disease and transplant, liver disease and transplant, immunodeficiency disorders, total parenteral nutrition, Crohn’s and colitis, hemophilia, von Willebrand disease, thalassemia, and severe asthma and allergies. They also have a special session for siblings of children who medically qualify to come to our camp programs.

Their Outreach Program, known as The Painted Turtle Outpost, allows them to reach out to children who are hospitalized, giving them a chance to be in an environment where they can “go to camp” and forget about their illness, at least for a little while. Since the launch of the program in September 2007, the Outpost program has brought the fun and spirit of their camp program into hospital playrooms and community events all throughout California.

We had the opportunity to visit Jessica Santos and Eliot Dreiband at The Painted Turtle and learn a little about what they are doing for children with serious medical conditions and their families.

Kennedy, 18, was horrified to learn that in his home country of Nigeria, more than 8,000 women are victims of female genital mutilation (FGM) each year. He created Calabar Youth Council for Women Rights (CYCWR) to take action against FGM and the multiple other forms of oppression women face. CYCWR leads conferences and weekly workshops to educate girls on their rights, the importance of education and the dangers of FGM and child marriage. He understands shaping youth’s perspective of gender is particularly important in Nigeria where justifications for female violation are engrained in society.

CYCWR’s nationwide campaigns advocate for women’s rights at large, as well as specific political issues. During the 2015 election, the CYCWR organized a campaign to inform the illiterate population about the candidates’ policies. In partnership with the government’s Ministry of Health, CYCWR helps run safe houses to rescue victims of abandonment, forced marriage, genital mutilation and unwanted pregnancies, and provides training and education programs. This year, Kennedy plans to expand CYCWR into all 36 states of Nigeria, with the vision of establishing branches all over Africa to advocate for the liberation of women.

According to UNICEF, at least 200 million girls and women alive today have undergone female genital mutilation in 30 countries.  Half of the girls and women who have been cut live in three countries - Egypt, Ethiopia and Indonesia.  – Female Genital Mutilation (FGM) is a global human rights issue affecting girls and women in every region of the world and is a violation of children’s rights.

According to the data, girls 14 and younger represent 44 million of those who have been cut. In most of the countries the majority of girls were cut before reaching their fifth birthdays.