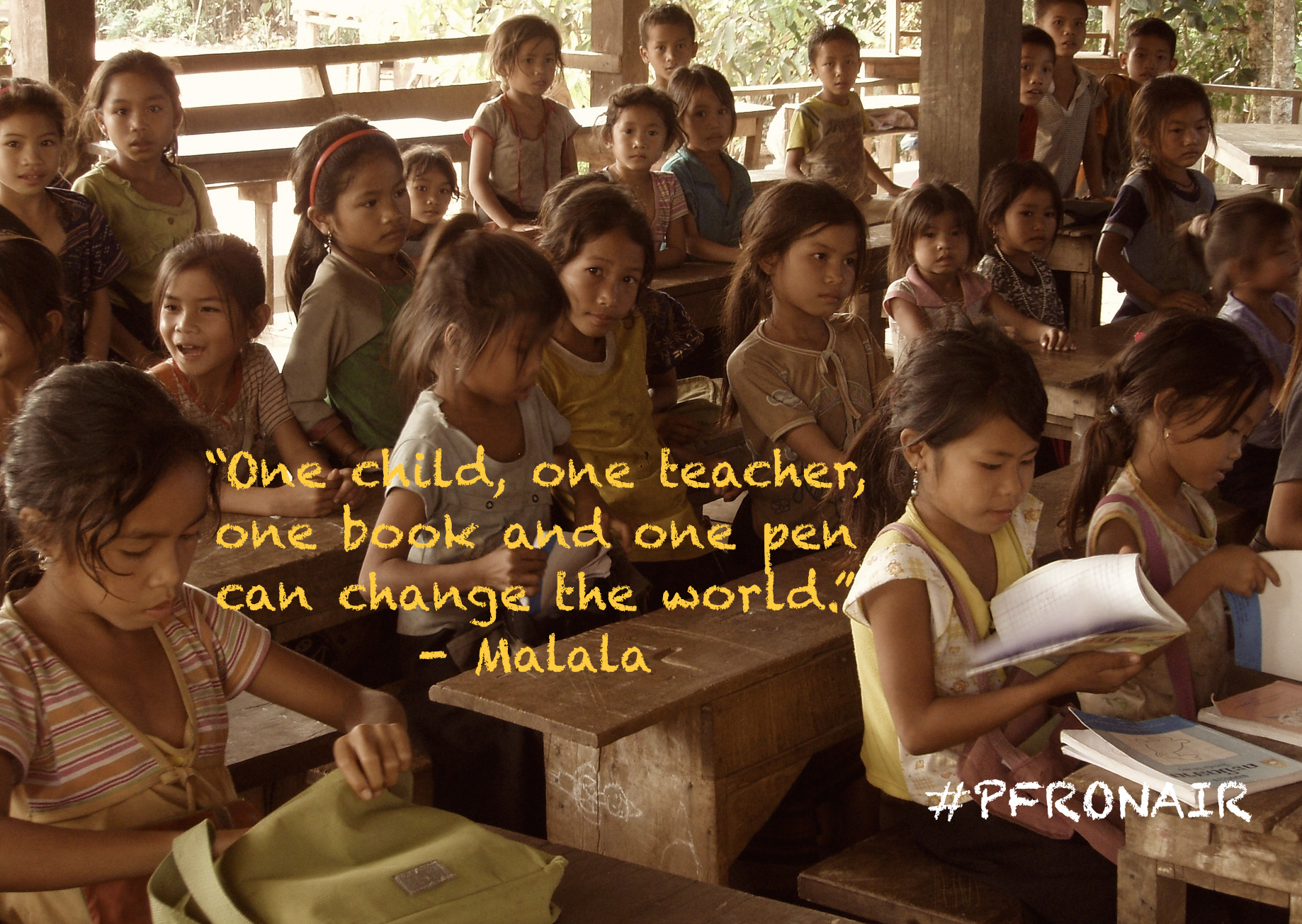 On today's show one of our frequent visitors and a past Hero of the Week, Dalton Cyr, joins us in the studio to talk about his new song, Fall Into Place. Guests this week include Erin Cahill and Vernon Wells.

Around the world 59 million children of primary school age are being denied an education, and almost 65 million adolescents are without access to a secondary school.

Education is the main thing that builds a community then the whole country.

But millions of children and adults around the world lack the access to education for various reasons — some live in conflict zones, others aren’t allowed to attend school because they’re girls, or they don’t attend because their families need them to work and bring in income to support the family. But because education promotes the understanding of social justice, interdependence, and identity, it is key to eradicating global poverty.

Sub-Saharan Africa is the most affected area with over 32 million children of primary school age remaining uneducated. Central and Eastern Asia, as well as the Pacific, are also severely affected by this problem with more than 27 million uneducated children.

In Sub-Saharan Africa, more than half of children receive an education for less than 4 years. In certain countries, such as Somalia and Burkina Faso, more than 50% of children receive an education for a period less than 2 years.  The lack of schooling and poor education have negative effects on the population and country.  The children leave school without having acquired the basics, which greatly impedes the social and economic development of these countries.

Often it's a matter of financial deficits. Many emerging countries do not appropriate the financial resources necessary to create schools, provide schooling materials, nor recruit and train teachers. Funds pledged by the international community are generally not sufficient enough to allow countries to establish an education system for all children.

Equally, a lack of financial resources has an effect on the quality of teaching. Teachers do not benefit from basic teacher training and schools, of which there are not enough, have oversized classes.

This overflow leads to classes where many different educational levels are forced together which does not allow each individual child to benefit from an education adapted to their needs and abilities. As a result, the drop-out rate and education failure remains high.

While at Cherry City Comic Con we got the chance to speak with Erin Cahill and Vernon Wells.

Passionate about helping others, Erin co-founded organization Charitable Living, a group of LA-based friends who decided they wanted to do more than just talk about doing good - they actually wanted to do it. Through volunteering and fundraising efforts, they have helped multiple charities each year.

In May 2015, Erin joined the nonprofit organization BuildOn and traveled to Malawi to promote education and build schools.  She and her husband Paul are committed to combating global poverty through education, both here in America and abroad. They decided they wanted to build a school in Nepal.  So many of their friends were excited that they have expanded it to a three-part project and are fundraising to build a school in Nepal, a school in Africa and to send 10 inner city school children from America on their build through BuildOn.

Vernon Wells, an actor/producer/director is known for his work on Mad Max 2, Commando, Weird Science, Innerspace and many others.

At only 14, Vernon followed in his mother’s footsteps and became the lead singer of a successful rock show band for five years. While pursuing his singing career, Vernon graduated with an engineering degree in telecommunications. But by now, he had been bitten by the entertainment bug—he was not interested in telecommunications. He wanted to pursue a career in the entertainment industry.

While working as an actor, Vernon’s interest in the art of making movies gradually moved him into producing and directing. He joined one of Australia’s premiere commercial directors and worked his way up to Assistant Director and Producer, working on television advertising campaigns and documentaries. After five years, Vernon established his own commercial production company.

Vernon has worked on and starred in no less than 87 films and countless television shows.

Every day, 11 teenagers die because they were texting while driving.

Distracted driving is an increasingly serious problem in America, and teen drivers are some of the most susceptible to its dangers. In the face of so many distractions, driving more responsibly is not just important—it very well could be life-saving.

The average speed in the US is about 55mph. Taking five seconds to read a text in this time means that the driver travels the length of a football field without looking at the road, or being distracted. There are so many vehicles on the road now that this means there is a huge chance of something terrible happening in this distance.

Teenagers comprise a higher-risk group of distracted drivers for a number of reasons, not least of which being that they are typically much newer drivers in general.

Sixteen-year-old Dalton Cyr created the Breathe concept, a Music Film Trilogy to raise awareness about the dangers of distracted driving. Recently, Teens Against Distracted Driving, a non-profit organization dedicated to the social mission, partnered with Cyr on this project with the goal to have teens sign pledge cards promising not to text and drive. The project is released in conjunction with Distracted Driving Awareness Month in April 2017.

The film is about the fragility of life and love. The first of the three-part Breathe series, Fall Into Place depicts young love and heartbreak.

Dalton Cyr was a featured performer at the 38th Annual Young Artist Awards held at the historic Alex Theatre in Los Angeles, CA on March 17, 2017.

Since 2008, the global community comes together to commemorate World Malaria Day on April 25.  This year’s global theme for World Malaria Day is End Malaria for Good.  With the day just around the corner, we thought we would take a look back at an earlier Hero of the Week, Kritika Singh, the Founder and CEO of Malaria Free World.

Malaria Free World is proud to be a part of the worldwide movement to eradicate malaria through awareness, research, and innovation.  To World Malaria Day, they organize events, lectures, and fund-raisers to get a step closer to getting the world rid of malaria.

Since the beginning, Malaria Free World has devoted its energy to passionately advocating for the diseased, needy and under-represented members of our global family.   Malaria isn't seasonal. Currently, 300 million people either are infected or at risk of infection. A child dies every one minute from a malaria related infection.